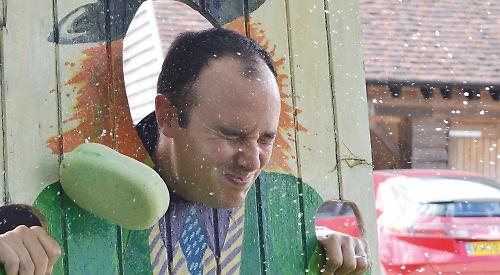 VISITORS basked in the sunshine at the first Fawley village fete in three years on Saturday, writes David White.

Temperatures topped 30C at the event, which was held in a resident’s garden and attracted about 100 people.

Attractions included a dog show, a plant sale with produce grown by villagers, tombola, raffle and a Punch and Judy show. There were also games including welly wanging and a cherry pip spitting contest.

A children’s corner, run by Jenny Blain, proprietor of Denning Montessori School in Fawley, included a sponge-throwing game, where children could soak their dads.

The fete raised £900 towards maintenance costs of St Mary the Virgin Church in the village.

Organiser David Napier said: “Everybody enjoyed themselves. It’s something we have done for many years and it does bring the people of the village together.

“Although it was a glorious day, I think quite a few people decided to stay at home and have an ice cream in their back garden.”