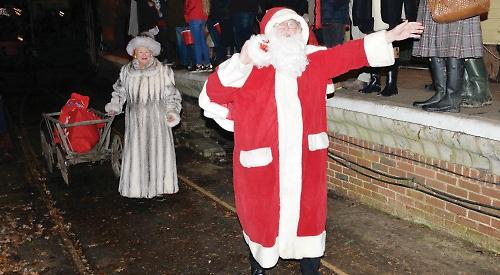 The 13th annual play took place on Sunday evening at Somersham station on the Fawley Hill estate, the home of Lady McAlpine.

The traditional nativity play featured more than 40 nchildren from the village and surrounding area performing on the track and station platform built by Lady McAlpine’s late husband Sir William McAlpine in 1960.

Members of the cast were ferried to the stage in several journeys on The Fawley Mountaineer, a 0-3-0 saddle tank steam engine belonging to Sir William, a noted railway enthusiast, who died in March.

On each trip, the engine stopped just before the station and the youngsters walked down the track to a tunnel with a stage made from hay bales.

It then blew a large cloud of steam towards the spectators before reversing.

Rev Stephen Southgate, rector of the Hambleden Valley group of churches, played the stationmaster and narrated the story.

He was accompanied by children dressed as angels and also read prayers at the end.

Mary, who was played by Zara Perisce, arrived on a “donkey” which was in fact a pony from the estate’s Brackenhill Stud. Joseph, played by Woody Hurst, followed.

A star above the stage was lit up after a firework was set off to symbolise the star heralding the birth of Jesus.

Other children dressed as angels, animals, innkeepers, princes, stars and the three wise men as well as shepherds, who descended from the “hills” beside the railway bridge. There were also two real sheep named Vic and Bob owned by the Taylor family.

The crowd of spectators on the station platform sang carols including O Little Town of Bethlehem, Silent Night, While Shepherds Watched Their Flocks, Away in a Manger, We Three Kings, O Come All Ye Faithful and Little Donkey.

They were accompanied by pianist Suzannah Freer and guitarist Graham Wheeler, from the church group’s band. After the play, the children enjoyed a visit by Father Christmas (bearing an uncanny resemblance to illustrator Gray Jolliffe) who disembarked from the train alongside Lady McAlpine.

She loaded a wooden cart with bags of presents and pulled it up to the stage behind Santa as a snow machine was set off.

The pair then sat on the bales as children crowded around to collect their gifts and the adults sang Jingle Bells, We Wish You A Merry Christmas and Ding Dong Merrily On High.

Spectators then stood chatting while enjoying mince pies and hot drinks. Collections were taken in aid of the church group and the Railway Children charity, which supports street children both in Britain and abroad.

The play was first held in 2004 and has taken place most years since but was called off last year due to safety concerns over ice on the roads.

Lady McAlpine said this year it was “bigger and battier than ever” despite a slight reduction in visitor numbers and takings.

Rev Southgate said: “This was my second railway nativity as last year’s was snowed off and I was very happy to be back to celebrate Christmas with families from all over the area.

“It went really well and once again offered the estate’s customary eccentric fun. I can’t imagine there’s anything like it anywhere else. It is a great delight for all ages.”