Crew of RAF bomber which crashed in village while on secret mission are remembered... 78 years later 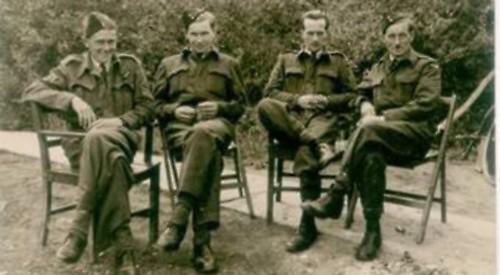 THE crew of a secret Second World War flight were remembered at a special service in Fawley.

Halifax DG283 was carrying 15 crates of carrier pigeons to agents behind enemy lines in France when it crashed at the site of Last Cottage in Fawley on March 14, 1943.

The six-man crew from 161 Squadron had taken off from RAF Tempsford, near Sandy, Bedfordshire.

Two of them died as a result of the crash and four survived.

Sunday’s service at the crash site was organised by Rev Sue Morton, of the Hambleden Valley group of churches, after she researched the tragedy.

She said: “I saw that our November service was going to fall on Remembrance Sunday and I wanted something really meaningful to talk about, so I started asking round to see if there’d been any plane crashes or anything like that in the area.

“Some people told me they’d heard about one in Fawley but no one really knew much about it. I found some researchers online who talked to me about the crash and the squadrons but no one knew where the crash site was.

The owners had a copy of a Henley Standard article which told the story of the crash.

The plane was due to fly as far as the Swiss border on a 1,000-mile round trip. As it neared Fawley, the Halifax suffered engine failure and some villagers saw one of its wings on fire.

The pilot, F/O Geoffrey Osborn, steered the crippled plane away from the built-up part of the village and prepared to make an emergency landing. He ordered his crew to jettison the heavy canisters and then with great skill he brought the bomber in on a north-westerly course. Peering through the gathering dusk, he could make out the fields ahead.

As it dropped, the plane smashed into a chicken house and cut its way through an orchard, the tree trunks ripping their way into the wings and fuselage.

The tail turret was torn clean off the plane and was thrown some distance, still with the gunner inside. He miraculously escaped serious injury.

The main part of the aircraft cut a deep furrow in the ground before coming to rest, when a fierce fire broke out.

The pilot, his face badly injured and his hands terribly burned, groped his way through the flames and dragged members of his crew to safety.

He was found at the scene by Allan and Helen Midgley-Carver of Five Gates, Fawley.

RAF Tempsford was home to two squadrons, 161 and 138. The crews were involved in dropping or picking up agents behind enemy lines, or dropping equipment to them.

The squadrons acquired the nicknames the Moonlight Squadrons, Cloak and Dagger Squadrons and the Tempsford Taxis.

The servicemen were sworn to secrecy about their work and even had to lie to high-ranking officers about what they were doing.

The pilots would fly at night, looking for fires or torches to guide them into landing in fields. More than 600 men from the two squadrons died during the war.

Halifax DG283 was carrying the pigeons to drop to resistance operatives to send messages home.

Rev Morton said: “We don’t know if any of the pigeons survived the crash but the owner of Last Cottage suspects that some did as there is an over-abundance of them here!”

F/O Osborn suffered spinal injuries in the crash and burns to his arms and face. After the crash he did not return to operational flying. He later received the George Medal for bravery. Sgt R Poltock, the flight engineer, died in 2003 without ever discussing his work with the squadron in detail but his son provided photographs to a researcher.

About 90 people attended the service, including Wycombe MP Steve Baker, who is a former Royal Air Force engineer, and Lady McAlpine, of Fawley Hill, who allowed people attending to park on her land.

During the service, the Wild Church choir sang the Airmen’s Hymn and God is Our Strength and Refuge.

An aeroplane passed overhead, which Rev Morton joked was a specially arranged fly-past.

She said: “Here at Last Cottage there are vines growing out of the land that was churned up by a burning aircraft.

“It is true that at the lower ground at the foot of the garden the vines grow sparingly, perhaps due to fuel-soaked soil, but elsewhere we see growth and the possibility of fruit.” The service was part of her Wild Church, which she started in May with outdoor services on the second Sunday of each month.

Rev Morton said: “In lockdown we were having services in the churchyard and we noticed that people who wouldn’t normally come to church came along. Now we’re back in the church, so I started the Wild Church in order to keep outdoor services going.

“People came to the service from all the villages in the Hambleden Valley and most people had no idea about the plane.

“It was wonderful to see so many people there, children and adults and members of our elderly community.

“A lot of them were at our traditional remembrance service in the morning and then they were out again for this.”