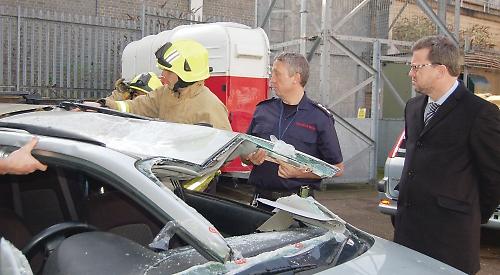 Rob Wilson visited Caversham Road fire station in Reading to learn more about the work that the Royal Berkshire Fire and Rescue Service does in the community.

The Reading East MP met the green watch crew and was shown around the station.

Station commander Jess James explained how crews are regularly called out to water rescues due to the proximity of the River Thames and the Mr Wilson was shown the station’s rescue boat Fire Alpha II.

The MP was also given a demonstration of how the service assists with road accidents.

Watch manager Geoff Wright and firefighter, Simon Appleby showed how firefighters cut into and rescue a driver from a crashed vehicle by removing the roof