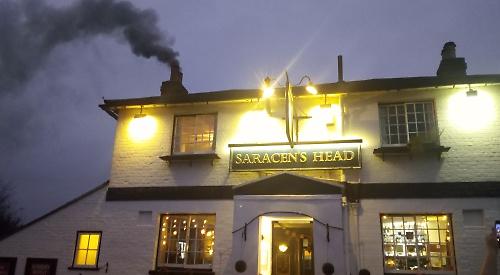 FIREFIGHTERS are being offered a free pint of beer after they put out a chimney fire at a Henley pub.

They were called to the Saracen's Head in Greys Road yesterday (Wednesday) at after the fire broke out and a plume of black smoke could be seen overhead.

It took more than four hours to get under control as it could not be extinguished from either the top or bottom of the chimney. A specialist hydraulic platform had to be brought in from Reading.

No-one was hurt and there was no lasting damage to the , which has been trading as normal ever since.

you, the pub operator and brewer offering a free pint or two to any local firefighter who drops into the pub.

A barrel of Brakspear’s Oh Joyful festive ale has been put on the bar especially for them to enjoy.

Landlord Colin Roberson said: “The fire brigade were real heroes. It wasn’t an easy fire to deal with as it couldn’t be extinguished properly from the top or the bottom of the chimney and they needed to bring in a hydraulic platform from Reading.

"It was a long job for them, but they were incredibly efficient, thorough and dedicated, popping back later that night to check we were okay.

“We’re also really grateful to people locally who have come to us with offers of help – we’ve been really touched by their kindness.  We’ve been able to reopen just one day after the blaze so it’s business as usual at the Saracen’s Head."

He added: “The firefighters have definitely earned themselves a free pint or more of Oh Be Joyful and I’ll certainly be raising a glass with them.  Without their prompt action, it could have been a very un-merry Christmas for the Saracen’s Head, and we will forever be grateful to them.”

For more on this story, pick up a copy of next week's Henley Standard.