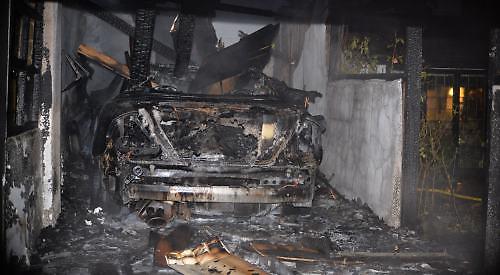 A CAR was destroyed when a fire ripped through two garages and a shed in Henley.

Four fire crews were called to the blaze in Badgemore Lane at about 3pm on Friday when smoke could be seen billowing from the buildings.

The cause of the fire is still being investigated but it is believed to have started following an explosion in one of the garages and then spread.

A Mercedes CLK Cabriolet, which was parked in the garage where the fire started, was gutted.

The fire also destroyed the neighbour’s shed and slightly damaged one of her windows and melted a drainpipe.

They were concerned about the risk of another explosion from the petrol in the car’s tank. They pulled down what remained of the garage to ensure the fire was out.

Alan French, who owns the Mercedes, made the first of 16 calls to the fire service. He said he was pleased nobody was hurt.

Mr French, 79, a retired corporate accountant, had returned home from having lunch out and was in his office when he heard a loud bang.

He went outside to investigate before raising the alarm.

Mr French, a former president of Henley Rotary Club, said: “It was quite a serious fire.”

Dan Final, an electrician who was working on a neighbouring property, said: “We had been working here all day.

“We heard a loud bang and then we heard all of the ambulance and police sirens.

“It was like the sound of someone whacking a garage door with a big hammer.”

Mr French believes the fire was caused by a faulty battery conditioner. This is used for older cars to ensure the battery remains fully charged. He had had the battery for more than 20 years.

He said: “The Mercedes is about 10 years old and I have had it for seven years. It is upsetting and it is going to take a lot of sorting out. I was fairly attached to the car. I had only done 18,000 miles in the seven years that I had it.

“I used to take it out in the sunshine and put the hood down.

“I have always had classic cars but the garage only has so much room. I have insurance for my home and my car and I have quite a few calls to make.”

He added: “I would like to record my sincere thanks and appreciation to the firefighters from Henley, who were aided by crews from Reading, Wallingford and Marlow.

“ I have never had to call on the fire service before but they were very professional and efficient.” A spokesman for Oxford Fire and Rescue Service said: “The Henley crew were in attendance in seven minutes, reporting that they could see the smoke plume before they had left the fire station.

“On arrival they found that one garage was fully involved in fire with a car located in it and the fire was spreading to an adjacent garage and shed.

“Firefighters wearing breathing apparatus brought the fire in the buildings under control using water jets and needed to use foam in order to extinguish the car.”