Villagers evacuated after car crashes in high street at 3am 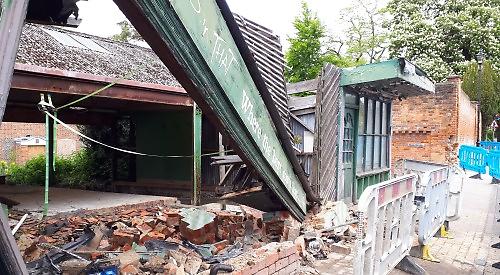 RESIDENTS were forced to take refuge in a pub after a car ploughed into a derelict building, causing a gas leak, in the middle of the night.

The Ford Fiesta left the road and crashed into the former This ’n’ That shop in High Street, Wargrave, at about 3am on Saturday.

The emergency services were called to the scene and an ambulance took the driver, believed to be a young man, to hospital.

Firefighters discovered that a gas main had been ruptured and police officers evacuated a number of nearby homes, banging on the front doors.

The firefighters were on the scene for nearly two hours as they worked to provide access to gas distribution company SGN as well as making the area safe.

The displaced villagers were taken in by Jayne Worrall at the Bull pub who had been reading in bed when she heard the noise of the crash. At one point there were about 50 people in the bar.

Miss Worrall, who has worked at the Bull since 1980, said: “I had not been sleeping very well and I heard this horrific bang.

“I looked out of the window but because I am at the other end of the road, I couldn’t see anything. I went back to bed and carried on reading and the next thing I knew there were lots of blue lights flashing outside my window.

“The policeman I spoke to said he was amazed that the driver got out alive — it was a bit of a miracle by the sound of things.

“I got dressed and walked up the high street to investigate and there were people stood outside their homes in their pyjamas.”

The building, which had been empty for nearly 10 years, had
collapsed.

Miss Worrall said: “It was a real mess and looked like a scene from a movie.” The road was still closed the following morning while the debris and brickwork as well as the vehicle were removed.

Miss Worrall said she felt she had to offer people who had been standing in the cold refuge at the pub, which has been closed due to the coronavirus lockdown.

“The social distancing didn’t come into it,” she said. “People were just happy and relieved to have somewhere warm to congregate because it was quite cold.

“People were not in each other’s pockets but they were sitting at the tables. They had tea, coffee and biscuits until about 5.30am while the drama passed and the gas leak was made safe.”

Olivia Coppin and Tom Cleaver, who live next door to the former shop, were woken up by the sound of the collision and rushed outside to see what had happened.

Miss Coppin, who works at Ella’s Kitchen, near Grey Green, said: “We heard a banging noise. I looked out the window and saw bits of the car everywhere.

“I opened the door and saw the car and the engine had come out of the vehicle and was in front of my house. There was a smell from the gas leak and the engine was boiling hot, so that was a bit worrying.

“My boyfriend called the emergency number for [gas supplier] SSE and then a police car came racing through the street and all the residents were stood in their dressing gowns.

“In less than 10 minutes there was an ambulance and a massive number of police cars and then the gas people arrived.”

Miss Coppin added: “The police asked if there was anywhere we could go and we were not sure if we should go to the pub because of social distancing. We stayed in the Bull until 5am and the police were also having tea with us.”

Izzy Savage, who lives High Street, said: “I heard a massive bang and it made me jump out of my sleep. I was so tired and dazed and about 20 minutes later the doorbell kept ringing because of the police.

“I went down in my dressing gown and they said we had to evacuate because of the gas leak. It was quite surreal seeing everyone in the road at that time of the night.

“The police asked us to go to the pub and Jayne was so sweet in looking after us.

“We have all been self-isolating and then we were in the pub together, which was also weird, but it was not the main priority at that point.

“Jayne was absolutely amazing. She is such a kind lady and we all really appreciated having a cup of tea rather than standing outside.”