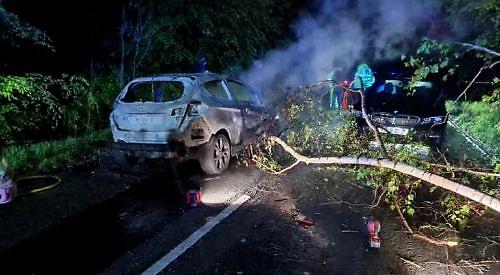 A CAR caught on fire near Henley after it collided with another vehicle that had stopped due to a tree branch blocking the road.

The driver was heading from the town centre towards Nettlebed before skidding into the vehicle on the A4130 at about 9.30pm on Sunday night.

Four fighters from Henley Fire Station in West Street put out the blaze with one hose reel and removed the tree branch from the road.

Another vehicle that was travelling in the opposite direction had also stopped because of the branch and suffered fire damage from the blaze.

The drivers of the stationary cars were not in their vehicles at the time of the incident and no one was injured.