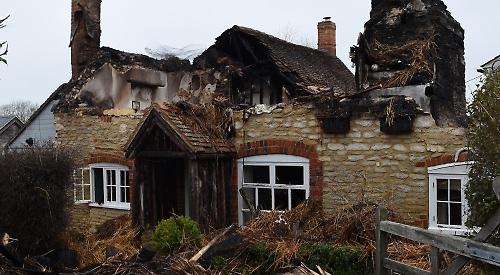 AN historic thatched cottage in Ewelme was badly damaged by a large fire on Sunday.

Ten fire engines were called to Thatchings, a Grade II listed Tudor building in The Street at about 9.50am.

The Street was closed and some other houses were without power as the crews tackled the blaze.

The village hall was open to any affected residents.

The timber-framed cottage is one of the four oldest private houses in the village.

The owners were on holiday.

Ian Grant, who lives in Green Lane, was walking to the village shop to buy a paper when he thought he saw steam coming out of the roof of Thatchings.

He said: “As we got closer, I realised it wasn’t steam but smoke coming from the roof.

“There was a young woman with two dogs who was there at the same time as us and she got her phone out and called the fire brigade.

“We waited until they came but the fire got worse and one of the windows busted into flames. It was terrible to watch.

“It’s a shame as there are not many thatched houses left in the village and I feel very sorry for the owners who will be coming home to that.” Villager Carol Sawbridge, who chairs the Ewelme Society, said: “It was a terrible shock for the whole village.

“Knowing that someone’s home in the heart of the village was in flames was just horrible.

“The firemen were so brave and at one point four of them were on top of the roof trying to control the fire but they couldn’t. We know thatch fires are difficult to put out because thatched roofs are designed to be water-repellent and it was quite a breezy morning so that didn’t help.

“It’s such a shame — the cottage is one of the most iconic buildings in the village and survived for such a long time.”

Terry Allsop, who lives in The Street, said: “At about 10am we heard the sirens but did not realise they were coming into the village.

“Fifteen minutes later there were even more sirens and this time I went outside and it was obvious the smoke was coming from the area of Thatchings.

“Everyone I have spoken to has expressed their sorrow about the property and especially for the owners, who must be besides themselves with worry.

“It did not help that they were on holiday when it happened.

“Let us hope the cottage will be fully restored. I am sure that in time it will be.”

Specialist appliances included an aerial appliance from Rewley Road, Oxford, a water carrier from Wheatley, a rescue tender from Kidlington, an incident support unit from Eynsham and a command unit from Maidenhead.

A spokesman from Oxfordshire Fire and Rescue Service said: “The crews brought specialist equipment, including a water carrier and an aerial ladder platform.

“The firefighters worked to control the fire and prevent further spread plus salvaged contents. There were no injuries.”

He said the cause of the fire was being investigated.

Firefighters were still on the scene on Monday morning.