Frightened horses can run off and hurt themselves on fence 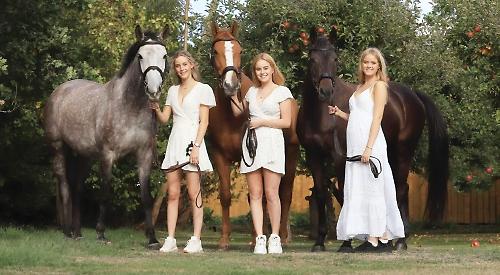 JANE TOWNEND has six horses that live in stables on her land in Chalkhouse Green.

She says the loud noises caused by fireworks can scare animals into injuring themselves.

The former solicitor said: “It’s not so much what fireworks can do to horses, it’s what the horses themselves do when they hear fireworks. They can run into fences and hurt themselves or injure themselves in stables.

“I recently had a horse injure itself on a fence. That wasn’t firework-related but it illustrates what can happen if a horse is afraid.

“They are a fight or flight animal and when they’re frightened they do run away. If they are in a stable they can’t run and become very agitated. They feed off each others’ fear.”

Mrs Townend, who lives with her husband Steve and their 16-year-old triplets Olivia, Hannah and Ellie, has always had horses and bought the first two of her current animals when the family moved to the area from Singapore in 2013.

Her daughters all ride with the Woodland Hunt Pony Club.

Mrs Townend tends to put the horses in their stables if she knows fireworks are going to be set off.

She said: “Some of the older ones have done Bonfire Night many times and are not affected as much but it’s harder for the younger ones.

“It’s a toss-up whether they would be better in an open space where they can run around or brought insdie where you can keep an eye on them. We’ve always brought them in. We’ve been very lucky in that we haven’t had anything bad happen to them. If a horse damages its leg it can become useless.”

She says her friend Cara Hayward, chef d’equipe to the British junior and young riders dressage teams, puts all her horses in a barn with a loud radio on to try to distract them from the bangs.

She says they both get scared when fireworks go off and have to be kept indoors.

She said: “They shake and, if they can, get into a small space. They hate the banging. I can hear fireworks from Henley and Abbey Rugby Club.

“It’s not that we want to stop fireworks — they can be great fun — but they don’t have to bang.

“”If I went into the stables and made a big bang my horses would be surprised because it’s an unusual noise. That’s what upsets my dogs too.

“The dogs are not upset by flashing lights or things in the sky and I don’t believe horses are either.” Mrs Townend also says that people in the countryside should be especially careful when setting off fireworks.

She said: “Some people who live in rural communities sometimes don’t consider the impact of loud fireworks or bonfires. Just because you’re in the countryside in a big, open space doesn’t mean you won’t have an impact on what’s around you. It’s about awareness.”

Sharon Berg, of Cadmore End, near Fingest, owns more than 20 animals, including a pony, donkey, alpacas, sheep, goats and dogs.

She says they all react badly when fireworks are set off nearby.

Mrs Berg said: “Any animal, large or small, is left shivering when there’s fireworks. They are either running around in their paddocks or shaking.

“Dogs seem to be worse than bigger animals as they are left cowering, barking and shaking, but it’s not fair on any animal.

“A lot of my friends have horses and they are petrified. They have to be brought in early. We have to keep our dogs indoors when there are fireworks. We used to have small dogs and couldn’t let them outside for days afterwards. You can’t do anything with the bigger animals, they are in their paddocks and have to go with it.”

Mrs Berg also suffers from tinnitus so she has problems with loud bangs and would like to see more quiet displays.

She said: “Any bang affects my ears badly. That is the biggest problem for me, it’s worse than the effect on the big animals.

“We live in a quiet place so we can hear them when they go off at things like the Henley Festival.

“They are not as bad as the local ones. When kids have fireworks and they’re nearby it’s a problem.

“I’m not anti-fireworks but I don’t see why you need the big bangs. The bangs and crackling seem to have got louder. There is a house near us that is rented out for stag and hen parties and they are asked not to use fireworks because the animals go berserk.”

• Are your animals frightened of fireworks? Call Henley Standard reporter Jamie Presland on (01491) 419444 or email
jpresland@henleystandard.co.uk