Luna whines, drools and shakes then looks for somewhere to hide 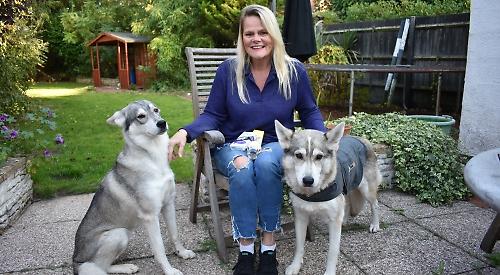 MARIE McARTHUR says her dogs Luna and Laika are both scared by fireworks, writes Jamie Presland.

Mrs McArthur, 54, her husband Graeme, 52, a company director, and daughter Mackenzie, 19, share their home in Lower Shiplake with the German Shepherd-Siberian husky crosses.

Luna, who is eight, suffers from the noise of fireworks more than her four-year-old daughter Laika.

Mrs McArthur has tried all kinds of remedies, including tablets, air diffusers and special dog coats, but none is really effective.

She said: “In the first couple of years when dogs are puppies it’s not a problem, it’s when they become more aware.

“Luna goes into panic mode, starts whining and trying to find somewhere to hide and then hyperventilates, drools and shakes. It’s horrible to watch.

“I’ve got tablets for Luna and start her on those six weeks ahead of the fireworks season. There’s also a diffuser by her bed which gives out hormones.

We’ve tried everything. I’ve had tablets from the vet but she feels sick when she takes them and you can’t keep them on those for weeks on end.”

Mrs McArthur has even tried a ThunderShirt, a compressed vest which dogs and cats can wear to reduce anxiety.

She said: “It is like swaddling a baby. Luna is tied in so she can’t hyperventilate. It’s like someone giving her a big hug.”

Mrs McArthur says the family’s home effectively goes into lockdown mode during fireworks but that doesn’t stop the dogs panicking.

She explained: “We have all the blinds down and the windows closed, music is on loudly in every room and all the lights are on so they can’t see the flashes.

“Laika doesn’t want to go outside but she doesn’t hyperventilate. Luna is the one who suffers badly.

“She will climb windows and wardrobes trying to find somewhere to escape the noise. If she was to get out for any reason she would just run and not stop.”

Mrs McArthur says she enjoys fireworks but wants to see them restricted to just a few larger, organised displays rather than being let off almost every night in November.

“If it was just one night we could cope with it but it goes on for weeks and you can’t prepare dogs for that,” she said.

“More people seem to have dogs now and they are affected but it’s not just dogs. You don’t see cats or birds anywhere when there are fireworks as animals run from them.

“Young children are affected by them too.

“The big, organised displays are fantastic and they are just one or two days you can prepare for.