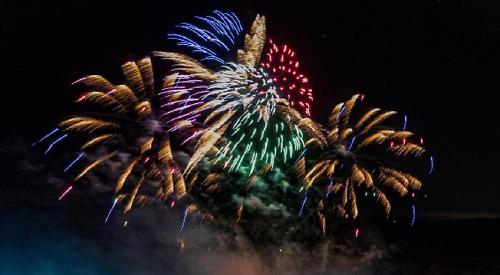 ORGANISERS of a fireworks display in Henley have been lambasted over the noise, which was likened to a bomb going off.

Residents living up to several miles away complained about the loud bangs coming from the event at the Henley Showground on Saturday evening.

They said their animals were terrified and houses shook and one compared the explosions to the sound of war.

However, the organisers said the show was designed to cheer people up and members of the audience said they enjoyed the evening and it was well organised.

The display, which was staged by Xplosive Events, of Wallingford, was due to be held on Bonfire Night but had to be postponed due to the second national lockdown. It was rearranged for Saturday at the showground off Marlow Road.

A performance with reduced sound levels for children was held at 7.30pm and this lasted about 10 minutes.

This was followed by the 20-minute main event, which was choreographed to music and featured some of the biggest fireworks available.

Kate Waddington, of Roundhouse Farm in Fawley, said: “I had no idea of the sheer scale of the thing. Living in the Henley area, we are pretty used to fireworks with the regatta and festival. They are a bit of a nuisance but they don’t normally affect me too much.

“I have never seen or heard anything like this before — the volume was incredible and I could feel the vibrations.

“This had the potential to do a serious amount of harm. I spent all evening in the barn with my horses because I was very worried about their response but I had no idea how horrendous it was going to be.

“I was looking after one of my horses because it has recently had surgery. He was absolutely horrified and was dragging me around the pen. If I had let him go, he could have ripped his wound open and done serious damage.”

Mrs Waddington, 58, who owns 11 horses, six dogs and 70 sheep, added: “The race horses took off and I had no idea where they went because I was trying to hang on to the one that had just had surgery. Thankfully, they were okay but they were covered in sweat from running around. It could have been much worse.

“I understand that a lot of people enjoyed it but why should their enjoyment come at the expense of other people’s misfortune?

“There must be people locally who suffer with post-traumatic stress and other related issues, so it’s not just about the animals.

“I don’t know how anyone who calls themselves an animal lover could support that kind of activity.

“I do weddings up here and I have restrictions on the volume and the time that music can be played — how can that even come close to this atrocity?

“Someone from Peppard got in touch with me because they could hear it and said, ‘What the hell is going on?’”

Ann Shankland, of Paradise Road, Henley, said: “Normally there are fireworks at the regatta and this year they’ve been more regular on Thursday nights for the NHS workers but this was in a totally different league — it was so loud.

“It sounded like something was exploding rather than just fireworks. One of my neighbours said their house was shaking — it was unbelievable.”

Mrs Shankland, 70, a retired business owner, said she thought the display was at Henley Rugby Club and when she discovered it was another two miles along the road she was “flabbergasted”.

Her eight-year-old Labrador Teddy was scared by the noise.

She said: “He is one of the most placid dogs on the planet and it doesn’t normally take any notice at all but he was jumping around and getting quite upset.

“I’ve had him since he was a puppy and I used to own horses. If there are any horses in the area then they can get really badly spooked and upset by fireworks.

“There are an awful lot of people in around Henley who have dogs and they must have been terrified.”

Patricia Knights, of Fair Mile, Henley, added: “I couldn’t really believe my ears on Saturday evening. I thought someone had dropped a bomb somewhere. I have never heard such loud fireworks in my life.

“The dog was terrified and I feel desperately sorry for any wild or farm animals in the vicinity. This dreadful noise continued for about 30 minutes.

“I initially thought they must be at Swiss Farm. I only found out on Monday that they were actually at Henley Showground, which is about 2.8 miles away.

“Do these people have no consideration for other people or animals?”

“Doesn’t need to be that loud, surely?” she said. “I’m all for fun and fireworks but those who say we’re killjoys have never had to call the vet after a horse has been injured while terrified by fireworks that sound like bombs.”

Bill Pollard, who attended the show, said: “I went with a rather noise-sensitive four-year-old, attracted by the prospect of quiet fireworks.

“We got out of the car to be greeted by Prodigy’s Firestarter at ear-splitting volume and noisy fireworks.

“Even the ear defenders we’d brought for her didn’t stop the terror, or the tears.”

Henley town councillor Donna Crook was among those to complain online about the display.

She said: “They may think it is okay to hold it out in the countryside but I could clearly hear the music and the fireworks — too loud and distressing for animals.”

There were also a number of positive comments online.

Ciaran Askin said: “We went as a family. The children were gutted to have missed November 5 due to lockdown.

“It was by far the best firework display we’ve seen — very safe and well organised with lots of marshals and loud announcements about staying covid-safe.

“After the year with holidays cancelled, I’m glad we went and would support the company doing it again in future.

“We have chickens and dogs but also like a bit of light-hearted entertainment now and again.”

Dale Clifton, who works in the live events industry, commented: “I thought it was run perfectly. Thanks for an awesome night.”

Sarah Ainslie said: “Absolutely loved it and so did our little two-year-old. Well worth the wait — a definite highlight of the year.”

The showground was divided into two sections to help with coronavirus measures.

About 1,900 people watched the display from a “park and walk area” and there were 800 cars in the “drive-in” arena.

Karl Mitchell-Shead, director of Xplosive Events, who designed the display, said: “We do accept that not everybody will enjoy fireworks but for the vast majority that needed this in their lives to bring some light at a dark time, we feel it is fair for the entertainment it brings.

“It is 20 minutes long and it was advertised for well over two months and people could have prepared for it.

“For every person that might not have appreciated it, I guarantee there will be hundreds of people who did.

The same show will be staged in Abingdon on December 19 and 20.