Fireworks noise made my horse shake with fright 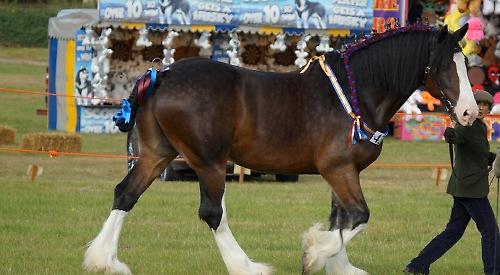 RESIDENTS have complained about loud noises and fireworks during the Bonfire Night weekend after witnessing the effects they had on animals.

Bruce Honey, who lives in Dunsden, had to tie his shire horse Mileaway Prince Harry with two ropes and stay in the barn with him for the night on Sunday as a fireworks display was taking place at nearby Abbey Rugby Club, in Emmer Green.

The horse won the in-hand championship and best ridden heavy horse at the Henley Show this summer.

Mr Honey, who has been looking after horses for 40 years, said: “We had seven people looking after nine horses and about 25 cattle throughout the display.

“It’s not just us, my guess is that there are at least 60 to 80 horses kept in fields very close to the club.

“Having a firework display of that size in a location set between a livery yard, a rare breeds farm and more cattle and horses behind them is totally inappropriate to say the least.

“We have repeatedly asked them to tone them down as it scares the animals and I had to move my animals as far away as I could from the display – we had to stay with them the whole evening to make sure they were not getting hurt and we were worried about what might happen.

“I am in agony after hanging on to a shire horse during their display. He pushed me through the doorway because he was so scared, I’ve never seen anything like that before and I know this horse very well.

“The rugby club has been repeatedly asked to reduce the noise of the display - it’s unsafe to run a display of that size in that location, the environmental impact to wildlife and livestock is unacceptable.

“There are viable alternatives like light shows and drones. They need to have a bit more respect and tone them down – no one should want to see animals that scared.”

A spokesman from the rugby club said: “The fireworks have been held for a number of years, and the club always makes sure local residents are informed of the date, to mitigate any effect on them and their animals.

“The club is fortunately in a fairly remote location, some distance away from any residential areas. The display itself is always a fairly short and held early in the evening.”

Amanda Jennings, an author who lives in Binfield Heath, said her two rescue dogs were also scared by the fireworks on Sunday night.

She said: “I love fireworks myself and I’ve taken my children to watch them this year, but I think a middle ground should be found when it comes to a full weekend of fireworks displays.

“It’s horrible to watch my dogs being scared – they stayed by my leg until they noise finished. Multiple displays and for a few nights in a row are wearing for dogs, horses and other animals.

“I don’t want to ruin other people’s enjoyment, especially as there has not been much cause for fireworks in the last 18 months, but I’m not convinced it is safe for animals or humans and it should be on people’s radar a lot more.

“I did think that this year’s Henley fireworks were a bit quieter so hopefully that is something they will keep going forward.”.

A firework display took place at the Culden Faw Estate in Hambleden on Friday, causing heavy traffic before and after the event.

The traffic jams caused major congestion and pollution from car engines through the Hambleden Valley and on the A4155 as far as Medmenham, the outskirts of Henley and on Remenham Hill.

It was advertised as “the UK’s largest low-noise display choreographed to music” and a spokesman for Xplosive Events, who organised the display, said that reducing noise levels is significantly made up for in visual impression.

In May, Councillor Donna Crook, who has two rescue dogs, presented a motion to the town council’s town and community committee asking it to encourage firework display organisers to consider using alternatives to traditional fireworks, such as a light show or drone displays

However, the existing legislation, which limits the sale of fireworks to those measuring 120 decibels or less, was deemed appropriate.

In the same year, the Henley Standard launched its Ban the Bangs campaign, encouraging the use of quiet fireworks.

This was in response to an appeal by Wargrave resident Jane Foddy, who first became aware of the issue when her Irish soft-coated wheaten terrier, Teddy, had a bad response.

Later, she appeared on ITV’s This Morning to discuss the issue with presenters Eamonn Holmes and Ruth Langsford.

note: I’ve asked for comment from Xplosive events and waiting to hear back from Donna

mileaway prince harry caption: the horse are the Henley Show

mileaway prince harry 2 caption: the horse (on the left) with Diane Honey