Spot on Morse sends visitors out of cup 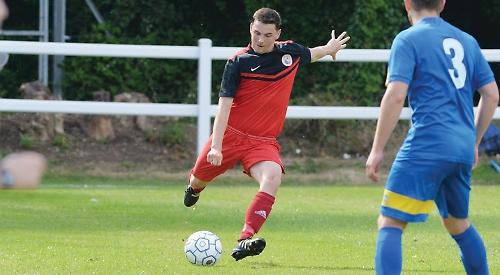 HENLEY TOWN’S run in the Perpetua Press Floodlit Cup came to an end with a narrow 2-1 quarter-final defeat at Fairford Town on Tuesday.

The Red Kites, who saw some players arrive late to the ground after getting stuck in traffic, had keeper Matt Hill save an early penalty before Chris Hood put them ahead.

But goals either side of half-time from the hosts saw Henley eliminated from the competition by their lower-league opponents.

The visitors started well on a wet pitch but gave Fairford a golden opportunity to break the deadlock after five minutes with a penalty conceded by Chris Nelson.

But Hill was equal to Nathan Blackwood’s spot-kick as he strongly palmed away the effort.

Fairford were made to pay for the miss when Hood capitalised on a defensive mix-up to slot the ball into the corner past home keeper Ben Mitchell.

The lead lasted just minutes as defender Ben Saunders rose highest to power home a header from a corner.

Saunders’ defensive partner Aaron had to be alert to prevent Henley retaking the lead before the break, denying Reece Buckett with a strong challenge.

Both teams had chances early in the second half but it was the hosts who took the lead with their second penalty of the game.

Forward Josh Morse, who had fired over from close range minutes before, was the man to convert the spot-kick after Tom Hogan was adjudged to have handled the ball inside the box.

Henley continued to battle and had chances through Michael Davies and Callum Carlisle.

They also had a shot cleared off the line late on by Saunders but were unable to find the equaliser.

Manager Rob Creech said he was happy with the performance despite the defeat and believes his side are improving.

He said: “From start to finish we played very well. We had a few injuries and suspensions so it was a makeshift team but I’m really pleased with the lads.

“The preparation wasn’t great with a lot of the players arriving late because of traffic due to an accident but we started off really well and took the game to them.

“After they scored the second goal we pressured them really well and the game opened up, it was end to end.

“We put a great effort in and we really should have got something from the game.”

The Red Kites will be back in cup action tomorrow (Saturday) when they face Adderbury in the Oxfordshire Senior Cup and Creech says he is confident of getting a result.

He said: “They are a team from a lower division and we are playing okay.

“We are improving week on week so I’m confident we can come away with a result.”