Davies' goal fires side into next round of county cup 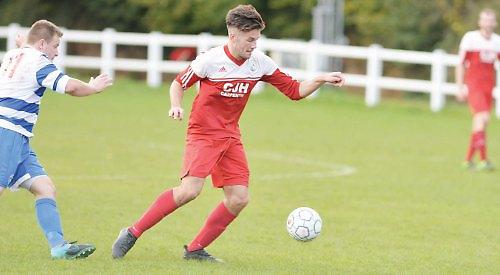 HENLEY TOWN reached the fourth round of the Oxfordshire Senior Cup with a hard-fought 1-0 win at Adderbury Park.

The Red Kites took the lead in the second half through Michael Davies’ flick from a corner but were indebted to goalkeeper Matt Hill for several smart saves to maintain the lead.

Henley, whose form in cup competitions this season has been a welcome respite to a poor league campaign, started strongly and hit the post through Davies early on.

The woodwork came to Adderbury’s rescue again when Reece Buckett’s 25-yard strike clipped the top of the bar but the hosts settled into the game and had chances of their own.

Hill made several good saves while Henley were also forced to clear a shot off the line when he was finally beaten.

The scores were level at the break but Henley broke the deadlock in the second period when Chris Hood’s corner was backheeled in at the near post by Davies.

The visitors dug deep and some resolute defending saw them play out the rest of the game with few scares.

Town manager Rob Creech said: “We had a bit of a scratch squad with injuries and suspensions but it was a hard-fought win.

“The lads put a lot of effort into the game and considering we had players playing out of position it was a very pleasing win.”

Henley will face fellow Hellenic League Premier Division Thame United at home in the next round on Saturday, January 14.

Thame are currently top of the league and Creech is expecting a stern test.

He said: “It’s going to be really tough, they are flying high at the moment and we haven’t been getting great results.

“We are doing quite well in the cups, which are always an unknown quantity, so we will give it our best shot and hopefully we will get through.”

The Red Kites then travel to third placed Flackwell Heath next Friday (December 30) looking for a first league win since October.

Creech said: “It’s frustrating because it seems when we play in the cup the pressure’s off and we grind out results.

“The boys are all aware of where we are in the league so it’s difficult to take the pressure off them but we are trying to get them to relax and play like they do in the cup.”