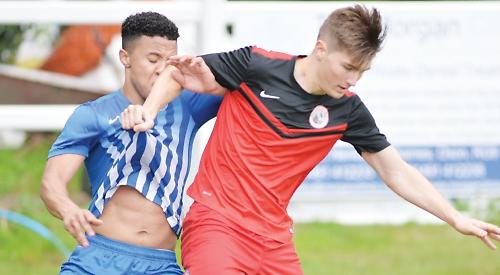 HENLEY TOWN ended 2016 with a heavy defeat as they were beaten 7-1 at Flackwell Heath on Friday of last week in their Premier Division Uhlsport Hellenic League clash.

The Red Kites fell behind to the Heathens after three minutes and, despite equalising soon after, were put to the sword by the high-flying hosts with foward Daniel Rapley netting a hattrick. The visitors’ cause was not helped in the second half when they were reduced to 10 men after James Griffiths was sent off after picking up his second yellow card of the match.

Despite heavy fog which saw games across the region called off, the match went ahead following a pitch inspection against a team which Henley came close to beating earlier in the season.

When the sides met at the Triangle in August, Nile O’Meally and Richard Bennett fired the Red Kites in to a 2-0 lead before Flackwell, who had a player sent off, equalised with two goals in the last 16 minutes.

Half the Henley squad that played that day, including the two goal-scorers, have since left the club, while others are currently injured. By contrast, Flackwell have stormed towards the top of the league and duly took an early lead when Rapley headed home.

But Henley rallied and were back on level terms less than 10 minutes as striker Patrick Gardner converted for the visitors. Henley battled hard against their title-chasing rivals but fell behind again after 34 minutes through another header, this time scored by teenager Dan Bayliss.

Rapley soon added his second goal of the game as the hosts held a comfortable 3-1 lead at the break.

Former Red Kites midfielder Jack Thomson-Wheeler, who left for Flackwell in October, scored against his old club before Joe Blount broke free to fire in a fifth.

Rapley was tripped in the box by Griffiths after 76 minutes and the Henley player was subsequently sent off after picking up an earlier yellow card 20 minutes earlier. Rapley got up to score his third goal from the penalty spot. Blount rounded off the result with a neat chip.

Henley face Brimscombe and Thrupp, who knocked them out of the FA Cup in August, at home tomorrow (Saturday).

They then host Thame United in the fourth round of the Oxfordshire Senior Cup on Tuesday before a must-win clash away at bottom side Burnham next Saturday.