Creech takes positives from game as losing run is halted 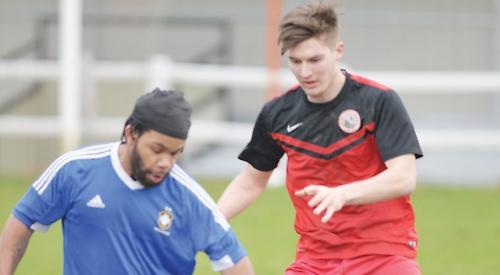 HENLEY TOWN put an end to a string of 11 consecutive league defeats with a hard-fought 0-0 draw at home to Highmoor Ibis last Saturday at their Invesco Perpetual Triangle Ground.

The Red Kites had failed to pick up a point in the Uhlsport Hellenic League Premier Division since October but defended resolutely against fellow strugglers Highmoor and were unlucky not to take all three points.

Despite rain earlier in the week, the game went ahead following a pitch inspection and Henley started the match strongly on a heavy pitch.

The hosts could have taken the lead in the first period when Karol Derewenko’s shot was pushed away from the top corner by the Highmoor keeper.

The Red Kites dominated play and looked comfortable in defence but found it difficult to create clear-cut openings.

In the second half the home side went close through midfielder Chris Hood, who cut inside and fired narrowly over the bar, but were forced to settle for a draw.

Speaking after the game Henley manager Rob Creech said: “In the first half we were much the better side, we stopped them creating anything.

“In the second half we also had a couple of good chances but they didn’t come off.

“It was a very heavy pitch, we were surprised the game was on and I think they were too. It’s hard to play any good football on a pitch like that but it was difficult for both sides and we had to get through it.”

Despite the point Henley remain rooted to the bottom of the league with just eight games to play but Creech says he is not too downbeat.

He said: “We can take a lot of positives from the game. We kept a clean sheet and played well, we should really have won the match.

“I’ve told the boys that it’s not a disaster if we go down. We are in the process of rebuilding the club right from the bottom so let’s stick with it, try hard and put in our best effort.”

Henley face a four-hour round journey to 11th-placed Lydney Town on Saturday.

Creech said: “It’s going to be very difficult because it’s a long trip and their pitch won’t be the greatest.

“It will be difficult conditions but if we play like we have for the past two or three games I’m positive we can get some sort of result.”