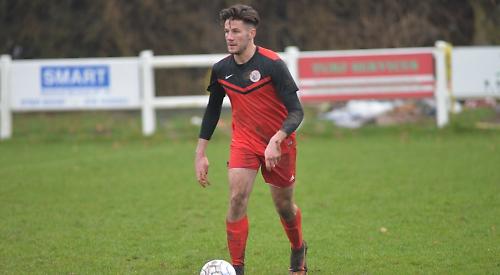 HENLEY TOWN’S first away Uhlsport Hellenic League Premier Division win of the season saw the Red Kites move off the foot of the table as they ran out 2-1 winners at Ascot United on Tuesday.

The visitors started well and former Henley keeper Matt Hill had to be alert to save shots from Karol Derewenko and Chris Hood. Soon after pacy 17-year-old James Spruyt ran on to a pass from Callum Carlisle to slide the ball past Hill to put Henley 1-0 up after 30 minutes.

Henley continued to dominate but were hindered on the hour mark when Loridon Daka picked up a second yellow card and was sent off.

The visitors continued to press forward and doubled their lead when Seve Mayberry struck a 25 yard shot from the left wing which gave Hill no chance after 71 minutes.

Derewenko went close to extending the lead for Henley but his effort struck the Ascot crossbar.

The referee was then injured and had to be replaced by a linesman and in the time added on Ascot pulled a goal back after a scramble in the Henley six yard box.

Henley held on for the remainder of the match to secure their first league win since October.

Speaking after the match a delighted Henley manager Rob Creech said: “We worked really hard and they found it very difficult to break us down.

“That result has been coming for the last few weeks, we’ve just had a few lapses in concentration
that have cost us. The boys
really focused well, put a lot of effort in and listened to what we told them.

“We’ve been getting a few results in the cups but it was nice to get that league win, it was a bit of a relief. I think it could have been even more convincing. When Liridon got sent off I thought things might be transpiring against us but it actually galvanised the team. We haven’t got a game on Saturday, which is disappointing, but we play Brackley on Wednesday and there will be great confidence going into that game. I’m looking for the same sort of performance.”

HENLEY TOWN crashed to a comprehensive 4-1 league defeat at Lydney Town on Saturday.

Chris Hood clawed back a goal for Henley in the second half but Morley-Lyne grabbed his hat-trick before Lewis Bamford added a fourth late on.

Henley came closest to breaking the deadlock in the early stages, Liridon Daka and Seve Mayberry causing the hosts problems up front.

But it was the hosts who opened the scoring when the referee spotted a handball in the crowded penalty area and Morley-Lyne stepped up to beat Garry Aulsberry from 12 yards.

Lydney added a second before half-time when a flurry of chances ended with Morley-Lyne drilling home from inside the box.

Henley started the second half well and were rewarded when the hosts failed to clear the ball and Hood smartly volleyed past Richard Thomas.

The visitors could have drawn level moments later when Thomas saved well from midfielder James Spruyt but Lydney put the game to bed when Morley-Lyne beat two men before firing in to the roof of the goal for his hat-trick. The result was wrapped up with 10 minutes left to play when Bamford fired through Aulsberry’s legs.