Footballer, 18, attacked by rival after match 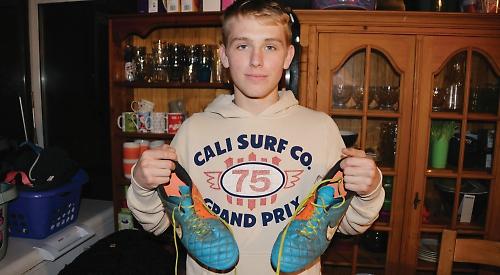 A TEENAGE footballer has told how he suffered cuts to his mouth after being attacked following a match.

Nico Cheesman, 18, claims he was the victim of a “premeditated” attack by an opposition player following Henley Town FC’s game against AFC Burghfield reserves in the Industrial Cup on November 5.

The incident happened just a week before a team-mate was hospitalised following a clash during another match.

Mr Cheesman, a forward, became embroiled in a dispute with the player after several incidents during the match and the argument over into the changing rooms afterwards.

As he tried to leave the club’s ground in Mill Lane, he was punched to the ground and suffered a gash to the inside of his lip. Spectators called the police but no arrests were made.

Henley Town written to AFC Burghfield asking for the player to be reprimanded. Mr Cheesman, who lives in Bix with his parents Dawn and Naunton and siblings Kiri, Dino, Enzo and Starr, said the argument began after he was warned for a foul on the opposition player during the match, which Henley won 3-1.

He said the referee told him that his opponent was a “loose cannon”, while the player himself threatened to “break” him and at one point kicked his legs away as he was dribbling.

Mr Cheesman said: “I stood up straight away and he got in my face. He lost his head.”

Soon afterwards he won a penalty which was converted to put Henley 2-1 up. Mr Cheesman said: “He stared right at me as we were running back.

“After I kept my head down but he kept squaring up to me. Spectators on the side saw him grab me from the back and he was whispering in my ear that he was coming for me after the match. I just kept quiet. My manager, Ryan, was telling me to laugh it off but he kept following me.”

After the game, Mr Cheesman says he was warned by the opposition goalkeeper to go straight back to the changing rooms without shaking hands but he was followed by the player.

He said: “He walked straight through the door and threw a water bottle at me, which hit the wall behind me and exploded.

“Ryan locked his arms and threw him out but as he was leaving he said he would be waiting outside for me.”

Henley players formed a barricade as Mr Cheesman left the changing rooms but the player found a way through and struck him on the left side of his face.

The men were separated and Mr Cheesman was taken into the clubhouse where he was tended to by team-mates.

He said: “I remember being at the bar and everyone asking me if I was okay. There was a lot of blood and my brace kept slipping into the cut. There were two train tracks on my top and bottom lips.

“Members of his team came up to tell me I was a hell of a player and didn’t deserve that, so even his own teammates didn’t support him.

“The referee said he couldn’t do anything as he hadn’t seen it. If he had, it would have been a red card or a ban. He said he would put it in his match report the league know about it.”

Mr Cheesman’s father, who had watched part of the match before leaving to coach at Henley Hockey Club, said he was shocked when he heard of the attack.

He said: “Nico is only just 18, otherwise it would be on a minor. If this had been in the middle of the match it would have been more understandable but he had the chance to cool down. It was completely premeditated.

“The club has been really good. They had a committee meeting to discuss it early this week and have taken it really seriously. They have said they will support anything we want to do and they want to see him reprimanded.”

Mr Cheesman said he had emailed AFC Burghfield to say he expected the club to take action against the player.

He said: “We will leave it up to them what action they take. If we deem that insufficient we will look to escalate things through the FA.”

Mr Cheesman, who also plays football for his school, Sir William Borlase’s Grammar in Marlow, returned to the Henley team for Sunday’s 1-0 home defeat to Imaan.

He said: “There were a couple of jokes in the changing room but that was it. I’m not scared to go out and play football again, except against him.”

During the Reading Sunday League match, Henley player Hugh Barklem, 21, had to leave the pitch after a confrontation with an opposition player in which he was elbowed in the head.

The striker had earlier been given a after a melée in the penalty area.

Mr Barklem, of Lane, Henley, said: “It was normal football scuffles. One of their players got hit by one of ours in a header and the whole team started to blame me. They were aggravating me and while I was standing there one of them ran up and elbowed me in the back of the head. I fell to the ground and my vision went. When I was helped up I felt really sick and had to go off.”

Later, he had a brain scan at Royal Berkshire Hospital.

Mr Barklem said: “I still have a bit of a hazy head and had to take the week off work.”