Head for the Hilly! 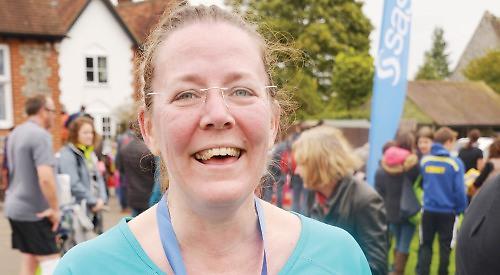 A HEADTEACHER completed her first 5km run to raise money for her school.

Jo Reid was one of 400 people who took part in the 10th annual Frieth Hilly in which competitors run either 5km or 10km through the countryside around the village.

Mrs Reid has been in charge of Frieth Primary School, whose parent-teacher association organises the event, since 2013.

She ran most of the way, only stopping to walk occasionally, and finished in a time of 42 minutes and 12 seconds.

The school choir followed her for some of the while singing and she was cheered over the finish line in the school playground by a group of pupils and parents before collecting her finisher’s medal.

Mrs Reid, who lives in Watlington, said: “Since I’m the headteacher I thought I needed to take part in the Hilly at least once.

“The PTA puts so much work into organising it and I thought it was only fair to put the work in as a runner.

“It was hard work but it’s a lovely course and so many people were cheering me on along the way.

“There was a welcoming committee at the bottom of the hill and lots of people had put up signs around the course saying ‘come on, Mrs Reid’. It was just wonderful.

“It’s a brilliant event that raises so much money for us. The children love it and it’s helped with a lot of projects, including improvements to our IT suite. At a time of cuts, it’s a real lifeline.”

Mrs Reid started training last year but had to stop in the spring after spraining her ankle and was only able to start again in August.

She said: “When I was training I did more walking than running but on the day it was the other way around and that’s good enough for me. I’m pleased just to have finished and don’t care about my time.”

The event began with a blessing by Hambleden Valley rector Rev Sue Morton after which the combined churches’ choir sang Jerusalem.

First to finish the 5km race was 14-year-old Adam Hunt, from Tokers Green, less than a week after he won the Henley Standard 10km.

Adam, who attends Shiplake College, finished in a time of 18 minutes and 25 seconds. He first competed in the Hilly in 2015, when he came and went one place better last year.

Adam said: “It was a great morning. The hill and the woods were a real killer but I enjoyed it and improved my time by quite a way so I’ll definitely enter again.” home was Boris Gurney, 15, from Hambleden, who finished in 19 minutes and six seconds.

He has now taken part four times and he finished third last year.

The first female to finish was Abbie Jones in a time of 20 minutes and 10 seconds followed by Penny McCrabbe (21 minutes and four seconds). The 10km run was won by Nick Shasha, 43, from Chingford, who finished in 37 minutes and 20 seconds, just 22 seconds ahead of runner-up Andrew Smith.

Mr Shasha said: “I found out about the event through the Runners World website and thought it would be fun. I’ve never done it before — it’s , really tough but this is a beautiful part of the world and I’d definitely come back.”

Race director Will Richards said: “We were really pleased with how it went and once again achieved our aim of staging a first-class run while keeping a low-key, family atmosphere. There’s always a strong community spirit and the course itself is fairly unusual as it is challenging and set in some stunning countryside.

“It’s great that Mrs Reid chose to run this year. She’s agreed to run the 5km again but I wasn’t able to persuade her to try the 10km!”