Neighbours to the rescue after charity money stolen 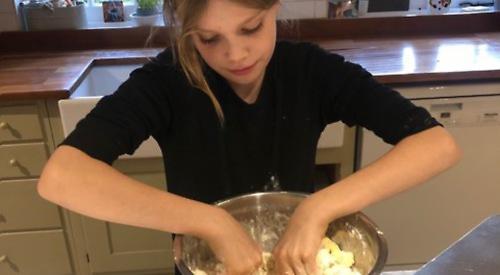 THE mother of two children who had £50 they had raised for the NHS stolen says she is overwhelmed by the generosity of neighbours and friends.

Sophia and Max Emanuel had collected the money by selling homemade cakes from a stall outside their home in Frieth on bank holiday Monday last week.

But the jar containing the cash was stolen by an opportunist thief when the stall was unattended.

Sophia, 10, and Max, seven, were upset by the theft but then neighbours heard about it and so many made donations that the children ended up raising a total of £1,083 for NHS Charities Together.

The siblings, who are both pupils at Rupert House School in Henley, decided to raise money while they were on their half-term holiday.

Sophia baked a range of sweet treats, including cookies, fairy cakes and flapjacks to sell.

She made a sign for the stall reading “NHS — help raise money and save lives” with her painted handprints on it. Max sold “mystery bags” filled with laminated paper facts about different species of animals.

Their mother Judith, 42, said: “The kids put so much effort into it. They are always coming up with ideas to try to make money and they are quite entrepreneurial so we all thought it would be a good idea to set up a shop.

“Sophia loves baking and she did all of it herself.

“The kids woke up early in the morning on the Monday because they were both so excited about getting started.

“It was going really well and Max was so excited to show me the pot and how much money was in it.

“I went upstairs thinking I might move the jar and then I came down with Max at about 4.30pm and someone had taken it.

“I don’t think it was anyone from the village but just someone who was driving by and thought they would take the money.”

Mrs Emanuel, who founded online yoga company Warrior Addict, said the children were both very upset by the theft.

“I said we should just carry on and see if we could make even more money,” she said.

“I told them that they shouldn’t be disheartened and we shouldn’t let some nasty people beat us.

“When the community heard about it, they were amazing and it was really heart-warming.

“One of our neighbours put it on Facebook and so many people donated. Everyone was so kind. We even got donations from people that I haven’t met.

“Our post lady came with a lovely handwritten letter and an envelope with money in it that she had collected from the staff in her office.

“One of our neighbours brought a pot of money with £130 in it that she had collected from the factory where she works.

“It was a real act of kindness and positivity stemming from something that was quite awful and instead of raising just £50 the children raised £1,000.

“It was nice for the kids to see there are more good people than bad people in the world.

“We had the shop up more or less every day during half-term apart from when we needed to bake more cakes, or have a bit of a rest, and we were really happy with how much money we raised in the end.

“The kids were both really amazing — they rolled up their sleeves and their efforts were more than paid off with the generosity and kindness from the villagers.”

The children were both born in France, when Mrs Emanuel ran her own real estate company.

She said: “They were both born in Nice and we moved back two years ago because I wanted to bring them up here.

“I was looking at London originally but I didn’t really want to bring them up in the city centre and felt that I would prefer somewhere in the countryside and I saw this house, which looked lovely.

“We didn’t know anyone in the area but everyone has been so lovely and we have fitted in really well.”

Sophia, who is in year 6, returned to school on Monday and will be moving to Tudor Hall School in Banbury in September.

She said: “I felt upset when the people stole the money but then my mum told me it was fine because it shows there are so many more good people than bad people.

“My mum taught me to cook when I was really young and I have enjoyed it ever since. I like watching The Great British Bake Off.

Max added: “I was really sad when someone stole the money but then really happy when we made so much more.”