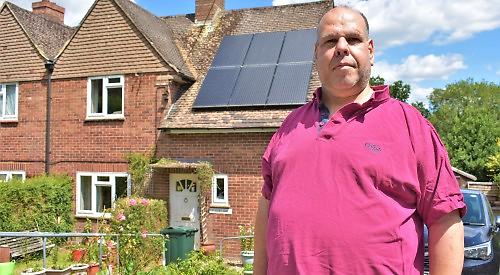 VILLAGERS raised hundreds of pounds to fix a neighbour’s roof after it was damaged by suspected conmen, writes James Burton.

The “rogue” tradesmen ripped the fascias and soffits from Verne Ross’s house in Ellery Drive, Frieth, and removed several rows of roof tiles which they smashed on the ground as they worked.

The 50-year-old civil servant had agreed to a smaller amount of work costing £500 but they claimed to have found more damage on the day and were demanding £1,700 to put it right.

Mr Ross drove off to his bank to withdraw the cash but was prevented by staff who suspected he was being exploited.

When he got back home, the men had vanished, leaving his roof in pieces and with a hole covered by plastic sheeting. Although he didn’t give the men any money, the damage would have cost more than £400 to mend and when his neighbours heard of his plight they agreed to fix it.

They raised the cash through an online crowd-funding campaign and carried out the repairs themselves over a period of three days.

Police are investigating and have offered advice on fraud prevention to Mr Ross, who is urging others to be more cautious if they are suddenly approached on their doorstep.

The incident unfolded on June 12, when he stepped outside to put a bag in his bin and noticed a man standing at his front gate and looking up at the two-storey semi-detached property. The man claimed to be a building contractor and said his front fascias and soffits needed replacing for £1,500 which Mr Ross, who has lived in the village all his life, told him he couldn’t afford.

The man then offered £500 and Mr Ross agreed as he knew that the fixtures were old. The man returned with two colleagues the following day plus a separate gang who put up a scaffold around the building.

Mr Ross was then told he also needed new rear fascias and soffits and they began smashing roof tiles to get to the wooden rafters underneath which they claimed were rotting.

Mr Ross became increasingly reticent as he feared they were taking advantage. In response, they became more insistent that he should pay £1,700 upfront but they vanished after he drove off to his bank in High Wycombe.

The cashier expressed concern when he explained his situation and froze his funds, telling him to return in a week. He did so and was advised by the branch manager to contact the police.

He was able to give the registration number of their van but didn’t take any of the suspects’ names or receive anything in writing.

Neighbours helped to dismantle the scaffold, which the “contractors” collected. Shortly afterwards, Mr Ross received a phone call from their “boss” demanding the money but there has been no contact since.

He said: “The initial quote was for £500 but they kept digging and digging further into the property and coming up with new problems when I hadn’t asked them to. I knew the fascias and soffits were old but much of what they suggested was unnecessary.

“I was desperately thinking about what to do and when I explained my situation to the bank staff, it was more like a cry for help and they could obviously see that something was going on. They left a lot missing from my house but I’m glad they didn’t get away with any money.”

Mr Ross said the police were very helpful and he would be a lot more cautious with doorstep callers in future. He has also thanked his neighbours for picking up the costs.

Anyone with information can contact police on 101, giving the incident reference 696 of June 12.