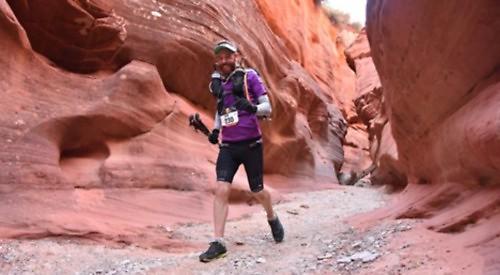 A MAN with cerebral palsy will attempt to run 1,900 miles in 85 days to raise money for charity.

Tom Crossland, 40, from Gallowstree Common, is to take part in the Run To Refuge challenge, which comprises 75 marathons in 85 days between June 2 and August 28.

He will be raising money for the TRIBE Freedom Foundation, a British charity fighting to end modern slavery and human trafficking.

Mr Crossland, who is a clinical psychologist for the Berkshire Healthcare NHS Trust, will set off from his home in Reades Lanes and run around the coast of England and Wales.

His first destination will be Henley, then London, north to Chelmsford and around Norwich.

He will then carry on towards Newcastle upon Tyne before heading west to Carlisle.

From there he will run south to Lancaster, Liverpool and Chester before following the coast of Wales round to Bristol.

He will then continue running to Weymouth, Southampton and Brighton before heading north back to London and finally return home to Gallowstree Common.

Mr Crossland plans to run between 45km and 60km a day and have two rests days each week.

He will have a support vehicle to carry his camping gear and will stop every 10 miles to refill his water bottle. At night, he will camp or stay in a hotel or bed and breakfast or with friends, depending on coronavirus restrictions.

Mr Crossland, a former coach at Shiplake Vikings Boat Club, was unable to walk until he was three years old as his condition affects his ability to move and maintain balance and posture.

He still has daily training and strengthening sessions to help him run as it has does bot come naturally to him.

Despite this, he has taken part in many ultra-endurance running challenges, including the 180-mile Grand 2 Grand Ultra in Utah in 2017 and the 162-mile Run For Love in the Azores in 2019.

Mr Crossland said: “The previous marathons gave me the understanding, practice and training for running for many hours but I’ve never done anything this long.

“There’s only a certain amount of training you can do and I can’t go on long distance runs every day but I have been training for a couple of years. People may be surprised to learn that a lot of the training is long distance walking with an hour of running at the weekends.

“I mix it up with some cycling sometimes. I train most days.”

Mr Crossland, who lives with his wife, Rebecca, 39, said he was not athletic when he was growing up but enjoyed being outside and was determined to build up his strength.

“I fell over all the time,” he said. “I had a permanent hole in the left knee of my trousers and a permanent graze on my left hip.

“At Hull University I started rowing and started to work on my strength. However, rowing takes up a large amount of time and after university I decided to take up running instead. In 2015 I took part in my first marathon and I got the running bug.

“I didn’t feel I was ever going to be very good at competitive running so a good thing for me was to see how far I could push my body.”

Mrs Crossland, who is a teacher at Reading Blue Coat School in Sonning, will be supporting her husband during the last few days of his challenge in August together with his parents, Alan and Jane.

Mr Crossland said: “Rebecca is fundamental in helping me to do this. Without her, I couldn’t go away for three months and come back and still have a house.

“My parents, too, have always been really supportive and they’ve encouraged me to not see my cerebral palsy as a disability and to get out there and be active.”

He hopes to raise £20,000 for the foundation and is already one tenth of the way there.

Mr Crossland said: “This is all really about raising awareness about refugees and other vulnerable people that are still affected by modern slavery and human trafficking.

“The charity is quite small but it is doing great work. It supports survivors of modern slavery and provides safe houses and gives long-term support.

“I have raised about £500 for them before but this will be the first big amount.”

You can follow Mr Crossland’s progress during the run at runtorefuge.com