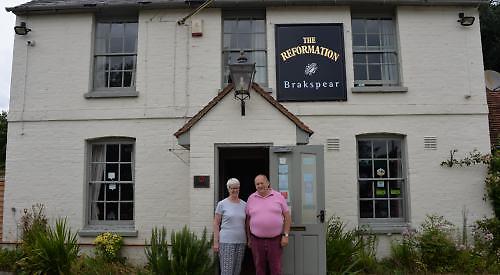 PLANS to build homes at the site of a former village pub have been scaled back after residents complained.

Brakspear, which owns the former Reformation in Horsepond Road, Gallowstree Common, has changed its application to South Oxfordshire District Council, the planning authority, by seeking permission for two houses instead of three.

The properties would be either side of the pub, one with four bedrooms and the other with three.

It has also applied to change the use of the pub into a veterinary surgery.

It comes after residents opposed the previous proposal, saying it would lead to more traffic and increase the risk of flooding.

Kidmore End Parish Council, which has failed to have the pub listed as an asset of community value, has objected again.

It said it was “sympathetic” to the idea of a veterinary centre but was concerned about the development as the village was not expected to accept a “significant” increase in housing.

Parish clerk Roger Penfold said the site was not infill or brownfield land and was not included in the neighbourhood plan.

Caroline Aldridge, who chairs the council, said: “If this application is passed the two houses will be classed as windfall and will not be counted towards any housing allocation in the neighbourhood development plan.

“There are other worries that the land behind the Reformation could be bought by speculative developers.”

Heather Steddon, of The Hamlet, said the plans were a “slight improvement” but she was still concerned.

She said: “These plans do not conform to either our neighbourhood development plan or to the district council's local plan with regard to development in a smaller village within the Area of Outstanding Natural Beauty. The only development here should be infill and this land is not infill.”

Rex Butters, of Tokers Green Lane, said: “Offering a reduction of one house does not change the point that the green space either side of the original building is being filled not within established policy.

“The street scene sketched in the revised application shows clearly how changed would be the view of this once beloved open space, a feature of this community.”

Sarah Kidd-May, of Horsepond Road, said: “My previous comments remain, particularly in relation to the very close proximity of the paving/terrace at the rear of plot two to the boundary hedge of my property, leading to a lack of privacy and potentially intrusive lighting.”

The Reformation has been closed since August last year when Bob and Sandra Hurst completed a one-year contract with Brakspear. Before they took over, the pub had been closed since November 2018 when landlord Stephanie Busher left.

The council has applied to the district council six times to have the pub listed as an asset of community value.

The applications were rejected because the supporting evidence of social events taking place at the pub did not include dates.