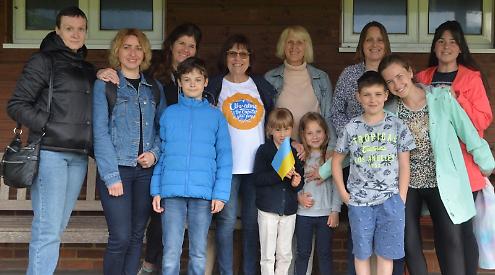 A WOMAN has facilitated the arrival of 23 Ukrainian refugees into the UK despite not being able to host any herself.

Rachel Head’s house in Gallowstree Common is too small for her to offer accommodation but this has not stopped her from helping to house 16 women and seven children fleeing the war-torn country.

The self-employed management consultant has co-ordinated a group of 11 hosts in Gallowstree Common, Kidmore End, Sonning Common, Peppard and Kingwood Common whom she matched with refugees.

She then organised the Ukrainians’ UK visas, picked them up from the airport, filled out post-arrival forms, drove them to job centres and supermarkets and arranged schooling for the children.

Ms Head, 58, who has lived in the Henley area on and off for more than 50 years, described the work as a full-time job.

She said: “It started because a couple of weeks into the invasion of Ukraine I was feeling like a lot of people — very helpless about what we could do.

“When I got wind of the Homes for Ukraine scheme, I thought, ‘I would love to be able to do that’ but I couldn’t as my house is too small and I wouldn’t have enough room to host people.

“We have a really active WhatsApp group in Gallowstree Common, which was set up during covid. I sent out a message saying, ‘I can’t host personally but I’m wondering whether we could as a community host a family’.”

The initial idea was for villagers to collectively rent out a flat for refugees to stay in and Ms Head organised a meeting on Zoom to discuss this, which about 30 people attended.

She said: “I shared a number of things I thought we’d want to do as a community to both find guests and subsequently prepare for their arrival.

“People were, on the whole, enthusiastic and wanted to help. Some were reticent because the scheme was so loosely set up at that point and there wasn’t really the support from the Government.

“I had a couple of people who said that they could host, whether it was an annexe or spare rooms they could use. I thought ‘great’ as that would be better than renting a flat.”

Ms Head decided to forget the idea of collectively renting a flat and instead began seeking other residents who would be prepared to be hosts.

This began with the process of finding, matching and preparing for the arrival of refugees.

She looked on a Facebook group called Accommodation for Ukrainians, where she was able to find refugees looking to come to the UK.

Ms Head then matched the people she found with hosts in the WhatsApp group, which at this point had expanded to the villages around Gallowstree Common, and set about organising the visas.

She said: “The visa application process is very complicated and onerous. It takes an hour and a half to fill in one application if you’re practised at it and days if you’re not.

“I did about 60 per cent of the visas myself. I was getting tennis elbow by the end of it.”

Ms Head and other members of the group also worked on creating a support system for the new arrivals.

She said: “I drew up the equivalent of a wedding list that included all the things we felt they would want and need when they arrived, such as toiletries, nightwear and slippers.

“People in the community put their name next to that item and they’d then get it and donate it. We then distributed it to all the different hosts.”

The refugees also received an amount of money that had been raised through a JustGiving page and a sale organised by Kathy Saoulis, a host in Sonning Common.

When the refugees began arriving, Ms Head picked up many of them herself from London Stansted Airport and invited some for a takeaway meal at her house on their first night in the country.

“They had never had an Indian takeaway before,” she said. “They loved it.”

Ms Head often finds herself helping out, driving the newcomers to job centres and an Eastern European supermarket in Reading.

She and Kristina Stitt, a host in Kidmore End, have also helped set up bank accounts and Universal Credit for the refugees.

Of the seven children, Ms Head organised for four of them to start at Kidmore End Primary School. The school has arranged for a Ukrainian woman to come in three times a week to help settle the children in.

Ms Head said: “The hosts are the ones who deserve the credit as they are giving up their space and time.

“The community has really rallied round, whether it be simply donating money or gifts, being part of the driver group, running a sale, or befriending and spending time with the guests.

“It’s very rewarding to see everyone here. It has definitely taken over my life and I don’t really think about a lot else. I would describe it now as a full-time job.

“It can be challenging — emotionally, logistically and practically — because there’s a lot of organisation but it’s also incredibly rewarding.

“I’ve made some incredible friends, both hosts and guests. I didn’t really know anyone in Gallowstree Common before this. Now I’ve met all these wonderful people.”

• The Home Office said on June 7 that South Oxfordshire had 380 refugees being sponsored by hosts, the sixth highest number for a lower tier local authority in England. Oxfordshire as a whole had the fifth highest number among English counties with 1,085. The UK total was 70,000.