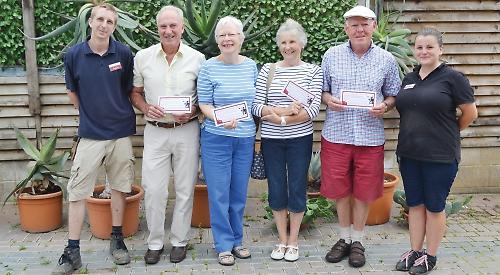 Villagers won the first, second and third place prizes in the front gardens contest, which was open to anyone with a RG10 postcode.

The winner was Robert Knight, of Thames Drive, who picked up a £100 voucher to spend at the garden centre.

Mr Knight, who came second in last year’s competition, said:  “When I am not playing golf I spend a lot of time in the garden.

“I have been in the house for 30 years so have developed the garden to meet our requirements.

“I go to a lot of trouble to get the right plants and what helped this year was the fact that the lavender were in their prime when the judges visited.”

Marion Davis, of The Hawthorns, came second and won a £75 voucher, while third place was shared by Frank Moore, of Thornbers Way, and Hilary Thomas, of Victoria Road, Wargrave. They each received a £30 voucher.

The gardens were judged by the centre’s general manager Andy Sherwood and plant area manager Maria Witowska, with marks given for quality of the plants, colour combinations and “future promise”.

Mr Sherwood said: “The standards were really high this year and it was a pleasure to visit all the gardens.”