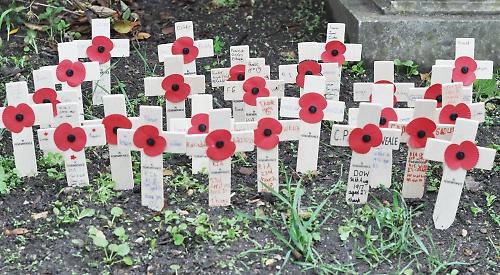 The launch took place yesterday (Saturday) at 11am in Market Place.

Cpl Grace Iveson made a speech about the importance of the appeal before herself and her fellow cadets, LCpl Amelia Jacob, Cpl Jasmine Barrow and Sgt Charlie James, handed poppies to Gillotts School head students Roman Meredith, Benjamin Price and Abi Botterill.

Mayor Sarah Miller also bought her first poppy from the president of Henley and Peppard's branch of the Royal British Legion, John Green.

A crowd of about 30 people gathered to watch the exchanges. Jazz singer Rebecca Poole, who performs as Purdy, was due to sing at the event but had to pull out due to testing positive to coronavirus.

For the full story and pictures, see next week's Henley Standard.