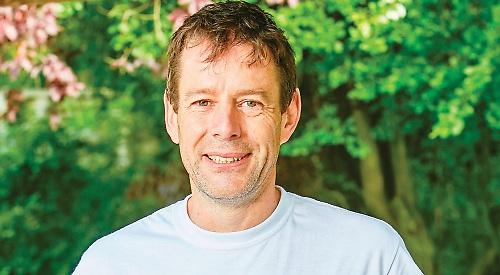 A MAN who took up running to get back into shape is preparing to embark on a four-day endurance challenge for charity.

Barrie Jackson, from Goring Heath, will climb a mountain, cycle 100 miles and complete a half-marathon as part of the Fourtitude Challenge for Mental Health UK.

The charity encourages people with mental illness to find help and offers support to their loved ones.

Mr Jackson, who works at Lloyds Bank’s head office in London, is part of a 60-strong company team hoping to raise at least £250,000.

The 48-year-old, who lives with his wife Suzie and sons Ollie, 14, and Josh, 11, signed up because a member of his family had experienced mental health problems. He also wanted to get fit again, having become less active as he grew older.

He started running and would take his exercise kit into work so that when he left for the day he could run the mile-and-a-half from his office in Oxford Circus to Paddington station.

Now he regularly runs long distances. He has run 10 marathons and seven Reading half marathons, completed three “iron man” triathlons and has taken part in the Goring 10km race for the past three years.

His wife is also a keen runner and took part in a half iron man event with him last year.

Mr Jackson’s latest challenge, which runs from September 4 to 7, will begin with a test of the team’s mental abilities which they won’t know any more about until the day.

On the following three days, the bank workers will climb 3,209ft Scafell Pike in Cumbria, cycle 100 miles across the Peak District and run 13.1 miles along the canal network in Birmingham.

Mr Jackson has been in training, running up to 30 miles per week after work and cycling up to 100km at weekends.

He said: “I got back into running partly because I wanted to get my weight and fitness back on track but mostly for my mental wellbeing.

“I’ve always been able to train without injury and I find it relaxing and meditative.

“When I took it up again, it was so much fun that I just kept going until I got to the level I’m at now. I’ve made a lot of progress and now I’m not bothered if my car’s parked five miles away from work — I’ll just run it.

“Lloyds regularly organises charity events and when this came up, I was very keen because it’s for such an important cause.

“I’ll enjoy the physical exercise, of course, but the fund-raising element made it a no-brainer. I wouldn’t say it’s going to be easy but as long as I keep up my training it shouldn’t be hugely difficult either.”

As an experienced competitor, Mr Jackson is giving his teammates advice on how to get into shape and during the challenge itself he will run, walk and cycle alongside them offering encouragement.

He said: “It’s very rewarding to see people who didn’t even own a bike beforehand improving their times.

“It isn’t meant to be a race but we’ll see how it goes. I reckon it could get pretty competitive when you’ve got a group of people on their bikes!

“It’s going to be a lot of fun with a lot of people raising money for a highly worthwhile cause.

“Sadly, there has always been a taboo around mental health and to a large extent there still is. However, it’s a real problem for many people –— you can’t automatically tell what others are thinking or feeling but research suggests one in four people will struggle at some point.

“We need to do whatever we can to raise awareness and make it as easy as possible for people to access support. They need to know it’s not a weakness — you wouldn’t think twice about getting help for a physical ailment but it shouldn’t be any different.”

To make a donation, visit www.justgiving.com/fundraising/barrie-jackson