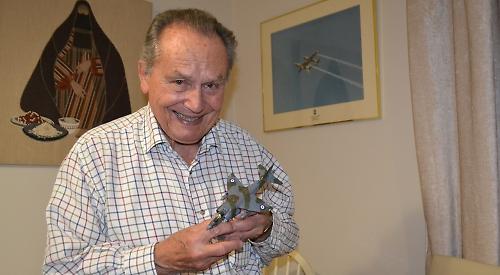 A MODEL of a Harrier fighter jet stands on a shelf in Tom Lecky-Thompson’s living room as a reminder of his proudest achievement.

On May 5, 1969, the former Royal Air Force test pilot won the Daily Mail Air Race after flying the aircraft from London to New York in five hours and 57 minutes.

Now 81 and living at Towse Court, sheltered housing in Icknield Road, Goring, he can remember it like it was yesterday.

Mr Lecky-Thompson took off from the coalyard at St Pancras station and crossed the Atlantic to Nova Scotia in Canada.

He then flew south along the east coast of America, passing over Boston and the edge of John F Kennedy Airport in New York before heading up the East River and touching down on a makeshift landing pad off Manhattan Island.

His Harrier, designed by British manufacturer Hawker Siddeley, was among the first of a new generation known as “jump jets” which take off and land vertically like a helicopter. They have nozzles which direct thrust from the engines towards the ground, allowing them to hover.

The race was organised to mark the 50th anniversary of the first successful non-stop Transatlantic flight by British aviators John Alcock and Arthur Brown.

The RAF entered in a Harrier as the Government wanted to showcase the new technology to the United States Marine Corps, which was interested in buying it.

Entrants set off in stages from the top of the Post Office Tower, now known as the BT Tower, in London while the finish was on the top floor of the Empire State Building in New York.

Mr Lecky-Thompson, then a flight commander, took a lift to the bottom of the PO tower at exactly 10am, then jumped into a helicopter that took him the short distance to St Pancras, where his Harrier was prepared for lift-off.

His wife Judy was among those who watched him leave.

He recalls: “I’d told her, ‘if you must come and watch it, don’t wear white and don’t stand downwind’ but she did both those things. She later gave me a hell of a ticking off for covering her with coal dust!”

Mr Lecky-Thompson was airborne at just after 10.06am and immediately headed for RAF Boscombe Down in Wiltshire, where a tanker plane was circling so he could refuel in mid-air.

This was necessary because taking off and then climbing to 36,000ft, his cruising altitude, used about two-thirds of the 900lb of fuel he had started with.

He refuelled a further 10 times during the flight using 13 tanker planes, some of which followed him from Britain while the others flew out to meet him from Canada.

There was no toilet on board so Mr Lecky-Thompson consumed nothing but liquid and a little fruit in the hours before take-off to minimise any discomfort.

He recalls: “I had to establish a routine that would ensure there was no hard food in my body. I had a line in my trousers that would have allowed me to urinate but I didn’t use it — it would have felt too much like wetting myself.

“I took with me a small snack lunch of a chicken leg and a bottled drink, possibly ginger beer, which I consumed halfway across.

“I was very, very busy throughout the flight and there wasn’t a single second where I could sit back and do nothing. I had to constantly monitor the conditions on the ground and work out how much fuel I was likely to have left as the landing got nearer.

“If I had too much fuel by the time I arrived, there was a danger I’d actually be too heavy to land and I had to dump some fuel to ensure this didn’t happen.

“I also had to make frequent radio calls to various air traffic controllers in America, so all things considered it was very involved.”

Mr Lecky-Thompson flew at speeds of up to 0.89 Mach, about 683 miles per hour or almost nine-tenths the speed of sound, and descended to 20,000ft when he reached Nova Scotia. After passing Boston, he dropped to 1,500 ft for the final approach.

He landed on the 90sq ft pad set up by the Marines on a pier off 25th Street East in New York’s Bristol Basin, then climbed out and was driven to the Empire State Building on the back of a motorbike by an off-duty police officer.

He was also presented with a solid gold cup, which he donated to the museum at RAF Northolt.

Mr Lecky-Thompson says: “It was incredible coming up the East River with Manhattan in the background, then seeing your landing spot amid this big line of piers.

“There were numerous light aircraft whizzing around to get photographs of me but I had to ignore them and focus on flying.

“When I landed, I was so relieved that I slumped down into the seat and they had to beckon me out of the cockpit as quickly as possible because the race hadn’t actually finished. I couldn’t believe we had actually done it.

“While riding the lift to the top of the Empire State Building, I started talking to this really tall man who said he was a member of the Harlem Globetrotters basketball team. Without knowing what I’d just done, he casually asked, ‘I suppose you’ve just dropped in from England?’ and I said, ‘yes, I suppose I have!’ I wish I’d got his name — I’ve still got no idea who he was.

“There was no big public reception for us but shortly afterwards I met a doctor who worked in a hospital that overlooked the landing site.

“He said my plane must have had some therapeutic value as several bedridden patients got up and rushed to the window to watch it land, which meant he could discharge them!

“Everything went according to plan — it was like magic, in fact. When we trialled it the week beforehand, there was some turbulence over the east coast of Canada and the tanker’s refuelling line was wobbling, which made it very difficult to insert the probe.

“The tanker pilot had to go into manual mode because he could hold the plane more steadily than the autopilot. That was very worrying but we had no problems on the day. It was incredible that it went exactly as we’d envisaged.”

Mr Lecky-Thompson was picked for the challenge in early January 1969, the day after tearing several tendons in his left knee while playing football. He was in plaster for eight weeks and told he would have to be able to bend the joint at least 90 degrees before he could fly again.

He said: “It was touch and go because they said I’d have to go to the rehabilitation centre at Headley Court. I said that wouldn’t work because I’d need at least six weeks there and I had to be flying again within a fortnight.

“I ended up taking a hot bath three times a day and exercising it myself. Within a fortnight, it was flexible enough.”

The day after his flight, Mr Lecky-Thompson and a colleague in another Harrier escorted the British cruise liner Queen Elizabeth 2 into New York harbour as it completed its maiden voyage.

He stayed in America for two weeks and took part in several demonstrations which persuaded the Marines to invest in the aircraft.

On returning to the UK, he was promoted to squadron leader.

Mr Lecky-Thompson was born in Burma, where his father was a member of the British imperial police force and fled the country with his family when the Japanese invaded in 1942. He was educated in India for two years before they returned to the UK.

He attended a prep school near Malvern and then went to Magdalen College School in Oxford.

In 1948 he joined the air cadets in Abingdon, where his family lived, and learned to fly a glider when he was 16. He gained his private pilot’s licence at the age of 17, before he could even drive, and then joined the RAF on a flying scholarship.

He said: “I was interested in aeroplanes from a very young age. When I was seven years old, my grandmother bought me this lovely battery-powered toy plane with propellers that turned. Sadly, it wasn’t built to fly so when I threw it off the verandah it crashed to the ground and I bawled my eyes out.”

He trained in Canada, then served in the Middle East for several years before returning to Britain and becoming an instructor. He later trained as a test pilot and was posted to Boscombe Down, where new aircraft are tested.

He met Judy in 1959 and they married the following year. They had three daughters, Sally, Claire and Louise, before the New York race and shortly afterwards had their son Neil, who lives with his family in Lockstile Way, Goring.

He left the RAF in 1975 and worked for a time in the private sector, designing aircraft simulators and their computer programs. He returned to the RAF as an instructor during the Eighties and left again in 1990.

He worked in commercial flight training for a time before retiring in 2005 to live in France with his wife, who died four years later.

He moved back to Britain after suffering a heart attack in 2013 and a stroke in 2014.

Earlier this year, he relived his experience for a series of short films called Real People, True Stories, which was commissioned by Towse Court’s owner Soha Housing to showcase the lives of its residents.

The three-minute video included newsreel footage from his flight.

Mr Lecky-Thompson said: “Life without flying is odd because it was all I’d ever had — it was a way of life. I do miss it but after having a stroke I don’t think I would ever be allowed to fly solo again.

“For me, the proudest aspect of the Daily Mail Air Race is the fact that it was a marvellous team effort. From the ground crew to the designers, air traffic controllers and tanker pilots, everyone made a sterling effort. It wasn’t just about one man and his aircraft by any means.

“We all got praise for it and it reaped enormous rewards for the country in terms of money, which was the best thing of all.

“It’s a popular anecdote in the family, though I only talk about it when I’m asked because there’s a danger that people will become sick of it.

“I’ve always tried to teach the children about the parallels between that flight and overcoming the challenges of everyday life — the importance of working together, trusting in your colleagues, thoroughly preparing and being willing to change your approach if it isn’t working.””