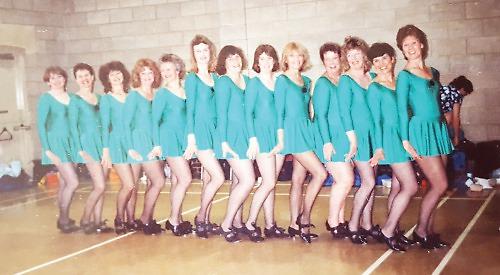 A WOMAN has returned to tap dancing — at the age of 90.

Margaret Smallbone, of Mountfield, Goring, is one of 14 women who attend a weekly class led by 86-year-old dance teacher Barbara George, of Croft Way,Woodcote.

The former careers adviser has been going to the sessions since Mrs George launched them in the Seventies.

But in recent months she had only been able to watch her fellow students practise and socialise with them afterwards.

Mrs Smallbone was concerned about falling and hurting herself if she took part as she has had both hips replaced.

However, recently she tried just a few steps with success and now dances for about 30 minutes of each hour-long class at Whitchurch village hall.

Mrs Smallbone, who still wears a pair of tap shoes bought more than 25 years ago, is the oldest member of the group, whose average age is about 75.

The women, who come from Woodcote, Whitchurch, Goring and Caversham, are accompanied each week by pianist Carole Wylie, who lives in Woodcote.

Mrs Smallbone, who turned 90 in April, said: “I have to sit down regularly and pace myself but I’m sure that dancing has played a big part in keeping me healthy.

“I’ve often mentioned it to various doctors and consultants and they’ve always encouraged me to keep it up as long as I don’t take on too much weight, so I can’t do any jumps.

“My balance isn’t too great and I don’t know how Barbara keeps it up as she’s not much younger than me.

“She always comes up with brilliant choreography and that’s a big part of why everyone keeps coming back.

“It’s so much fun because it makes you smile and we always have a really good laugh, which is what it’s all about. I love the rhythm and the piano and whenever we get into a terrible mess we just laugh until the tears are running.”

Mrs Smallbone, who has two children and two grandchldren, grew up in Tilehurst and moved to Goring with her late husband Peter in 1965. She retired in 1992.

She joined Mrs George’s class on the recommendation of a friend who attended when it was held at Storton Lodge in Goring.

The group relocated to Whitchurch after Storton Lodge was rebuilt in the Nineties and the new floor was too slippery for dancing.

Over the decades, Mrs Smallbone has taken part in numerous shows throughout the area and performed at various private functions with the group.

In 1986 she was one of six students who travelled to London to take the Imperial Society of Teachers of Dancing grade II exam in popular tap.

She was commended by the examiner who praised her “pleasing presentation”, “clear and rhythmical footwork” and “good poise and posture”.

Mrs Smallbone first became interested in tap dancing as a girl when she would watch Shirley Temple in films at the Rex Cinema in Tilehurst. She even learned some basic footwork from friends who were taking lessons. However, it wasn’t until she was in her fifties that she finally took it up.

“It seems a long time ago now,” said Mrs Smallbone. “I’ve always been quite an active person so when I learned about the class I thought I’d give it a go.

“I took to it pretty well from the beginning as I’d learned a few basic taps and steps from a friend who lived next door but one as a child.

“Barbara pushed me into doing the grade II test as she’s always been a hard taskmaster. I wasn’t exactly like Ginger Rogers but I remember it was good fun and we all passed.

“There’s a nucleus of core members who’ve been doing this for years and I don’t think we’ll ever give it up because we’re all a bit nutty and we love it so much.

“I remember when I turned 80 I was wondering how much longer I could keep going but 10 years on I’m determined to keep going for as long as I’m able. I’ve never felt like not going.

“When you’re living on your own, you need good company and I know I can visit the group, have a laugh and a chat, then make a fool of myself and it won’t matter two hoots.”

Mrs George grew up in Wargrave and started teaching dance when she was 18. She moved to Woodcote with her late husband Clive in 1962 and for many years ran a keep-fit class at Langtree School.

Mrs George said: “Everyone in my group has a great laugh and it’s a good way to keep your mind and body in shape.

“I’ve suggested winding it up a few times in the last five years but people insist that I should keep going.

“Most of the members are quite long-standing and Margaret was one of the first to join. We’ve all got our problems as we’re getting on a bit but when the music starts we all get going.

“If something does go wrong, everybody will be in stitches and it takes 10 minutes to get everyone back to square one.

“It’s lovely to see Margaret giving it a go again. Like many of us, she struggles with her balance but it’s like riding a bike — you never forget it completely and she’s still got it.

“I think at any age you mustn’t have the attitude that ‘this or that could go wrong’. You have to just take a positive outlook and think ‘I’m going to do it’.”

Last year, Doreen Pechey, a 71-year-old former engineer and mathematician from Crays Pond, achieved the Royal Academy of Dance’s grade VI ballet exam despite having had knee surgery in 2010 and 2014.