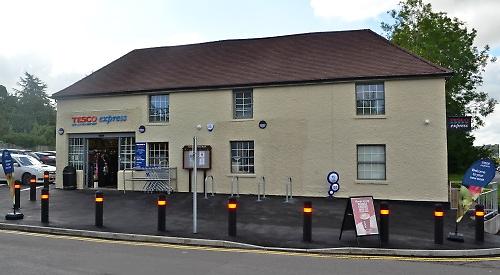 A NEW branch of Tesco has opened in Goring.

Scores of shoppers visited the supermarket giant’s new Express store on its first day of trading at the old Queen’s Arms pub in Reading Road on Thursday last week.

The former Greene King pub had been vacant since it closed in the summer of 2013.

Tesco purchased it a few months later and secured planning permission to convert it last year.

The shop has a 2,830 sq ft shop floor with 14 car parking places, a community notice board and a new dropped-kerb crossing in Wallingford Road. It is open seven days a week from 7am to 11pm.

The store manager is Ellis Ware, from Swindon, who has previously managed Tesco Express stores in Cricklade and Twyford.

She has a team of 16 staff and four supervisors, who greeted shoppers at the door and handed out free shopping bags on the first morning.

Ms Ware said: “I’m absolutely buzzing to be here. I’ve never worked in a location like Goring but it’s really beautiful so I feel very lucky. It’s a new adventure that I can’t wait to start.

When Tesco announced its plans, a group of villagers launched a campaign to stop the branch opening.

They held a series of protests at the site, claiming the move would threaten the village’s independent businesses and put pedestrians at risk when crossing the busy Wallingford Road.

However, surveys showed other residents were in favour of the scheme, arguing that it would cater for people who work antisocial hours and reduce journeys to the Co-operative Food store in nearby Woodcote.

Oxfordshire County Council, the highways authority, said there was no safety hazard.

The supermarket secured permission for “minor works” like signage and a service yard in 2015. It then applied for full permission to extend the floorspace, which was approved a year ago.

It is hoped that at some point the pavement in Wallingford Road on the approach to the shop will be widened in the direction of the railway, creating enough room for two people with buggies to pass.

Representatives of Network Rail and Oxfordshire County Council met at the site recently and will discuss their next steps later this month.

To celebrate the store opening, Tesco has donated £500 to Flint House, the police rehabilitation centre near Goring. The money is likely to go towards the cost of a new £1,000 massage therapy chair.

Ms Ware chose the charity as her father Mick, who retired in December after 28 years as a dog handler for Wiltshire Police, was treated at Flint House for two weeks after he suffered a shoulder injury in 2003.

Ms Ware said: “As well as my father, both my uncles were in the police so Flint House is a charity that’s very close to my heart.

“It didn’t occur to me straight away but as soon as I read about it online it was the obvious choice.”

Mr Ware said: “The treatment I received was absolutely first-class and I owe them a great deal.”

Kevin Bishop, marketing manager for Flint House, said: “Fixing injured policemen is a very important task and our 158 bedrooms are constantly full as we’re seeing more officers injured on or off duty every year.

“Our mantra is to give the best treatment possible and with the best facilities possible. In this day and age, that takes a lot of money so we are thankful for any assistance.”