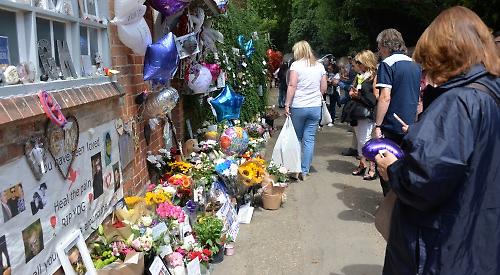 A CELEBRATION of the life of George Michael could be held in Goring next year.

The parish council has agreed in principle to allow a group of fans to stage the event on Gardiner recreation ground, off Upper Red Cross Road, on Sunday, June 24, the day before what would have been the singer’s 54th birthday.

It has also agreed to consult residents on the idea of allowing visitors to park and camp at Sheepcot recreation ground off Gatehampton Road, although it warned that this may not be allowed as it is in a residential area and neighbours could object.

The fan group, which was formed on Facebook, organised an informal celebration of Michael’s life in the village in June, which was attended by thousands of people from around the world.

Next year it wants to arrange something more structured.

It is to ask the organisers of the Gap Festival, which will take place the week before, to leave their marquee up on the recreation ground so that they can use it for live music.

The group says a number of well-known individuals have expressed an interest in hosting the event in exchange for donations to charities that they support.

It has promised to liaise with Thames Valley Police, South Oxfordshire District Council and Oxfordshire County Council to ensure any necessary safety measures are put in place.

Parish councillor Catherine Hall, who has been liaising with the fans, told a council meeting on Monday: “They’ve got themselves a little more organised this time.

“They’re anticipating more visitors, so they want to make sure everything is done properly.

“They’re already in the early stages of organisation and believe they have some high-profile sponsors lined up. What they are talking about is a very different proposition from what happened this summer.

“I think they feel Gardiner is the most appropriate site as it’s more central. They won’t be selling alcohol so it won’t conflict with the Catherine Wheel’s annual party and it’s close to the village shops and facilities.

“Regarding accommodation, they say all the local hotels and B&Bs are already full so they will struggle to find a place to stay.

“They feel Sheepcot is nearby, it’s nice and level and it has toilets which they could use.

“The kind of people who came last year exactly rowdy but I accept that these things can snowball once you allow them.”

Several members said the council could help find a private landowner who might let people camp.

Chairman Kevin Bulmer said: “There would be some practical considerations — for one thing, we don’t know if there are planning issues with allowing camping on Sheepcot, even if it’s just for a night. We can check that with the district council.”

Michael, who lived at Mill Cottage off Goring high street, was found dead on Christmas Day last year by his partner Fadi Fawaz. Medics were called but could not revive him. He was later found to have died of natural causes resulting from heart disease.

Fans descended on the village in the days afterwards to lay flowers, candles and memorabilia at the scene.

Many returned during his birthday when a series of tribute concerts staged at the village hall and the Catherine Wheel. There was also a balloon release and a charity auction of memorabilia.

The former Wham! singer, who also owned a house in north London, bought the cottage in 1999 and regularly frequented Goring’s shops, restaurants and pubs. He also attended a Christmas service at St Thomas’ Church the year before he died.

Anyone wishing to comment on the proposals should email the parish clerk at clerk@goringpc.org