Firefighters save £2.8m house on river in thatched roof blaze 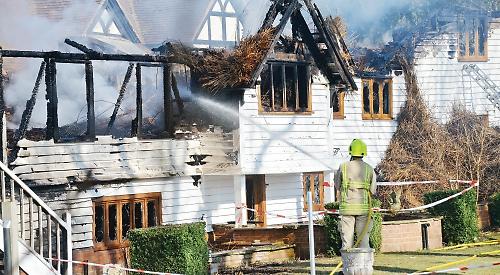 The fire broke out in a thatched roof at the southern end of The Boat House, a large, timber-framed Victorian property off High Street, at about 9.45pm on Friday.

It spread quickly and the glow from the flames could be seen from as far away as Didcot.

The owners — a couple with a young daughter — were not at home at the time.

Passers-by called 999 and crews from Wallingford fire station and Caversham Road station in Reading were first on the scene followed by five engines from Thame, Oxford and Eynsham.

Police closed the road so the fire crews could access the private driveway running alongside Pierreponts café.

Firefighters wearing breathing apparatus tackled the fire with water pumped from the River Thames and had the flames under control by the early hours of the Saturday morning.

The blaze gutted the upper floor of the five-bedroom house and caused smoke damage to other parts of the property.

Incident commander Darran Hookway said: “The roof was fully alight and crews worked through the night under some very demanding conditions to prevent the fire spreading into the main part of the house. Unfortunately, the thatched part of the house was completely involved so the first floor area was lost.”

Group manager Jason Crapper said: “Despite the timber construction and the complexities associated with the layout of the premises, firefighters were able to save a large part of the structure although the thatched parts of the premises were severely damaged by fire.

“Given the time at which this fire occurred, it is fortunate that it was spotted by passers-by otherwise the losses could have been even greater.

“I’m hopeful that the rapid intervention will enable the building to be repaired.” Fire crews remained at the scene throughout Saturday as the debris was still smouldering and had to use more water when the fire reignited several times.

Walkers on Goring bridge and the footpath at Goring lock, which overlook the site, stopped to watch the drama.

In the afternoon, the firefighters pulled clumps of thatch from the wreckage using a hydraulic excavator while utility firm SSE dug up the driveway and shut off the electricity for safety reasons.

The property was built in the late 19th century and extensively refurbished before being sold for £2.83 million in June last year.

About two-thirds of the roof is tiled but the original 62ft boathouse, which had living areas above it, was thatched.

It was once owned by explorer Charles Gardiner, after whom the village’s Gardiner recreation ground is named, and later by Frederick Shoolbred, who also owned Thames Bank in Thames Road.

The house is immediately upstream from Goring sorting office, formerly the boathouse of inventor Samuel Saunders, who pioneered the Consuta method of boatbuilding.

It is still subject to a covenant with Mr Saunders’s estate that it must not be used for commercial purposes.

Henley Deputy Mayor Lorraine Hillier, who lives in Streatley, was caught in the traffic chaos on the Friday evening.

She said: “I was driving home from Cholsey and could see all these flames even from there. It looked massive.

“I tried to go over the bridge to do a bit of shopping in Tesco but the police weren’t letting anyone through. I’m just glad nobody was hurt.”

The cause of the fire is being investigated but it is not being treated as suspicious.