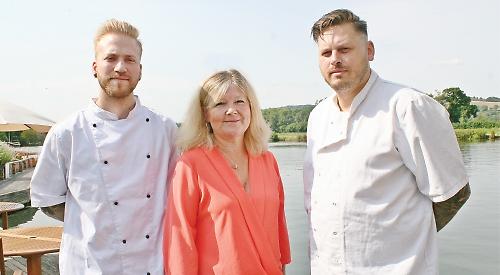 A RESTAURANT in Goring that was once listed in the Michelin Guide has reopened under new management.

Sally Albin has taken charge at the Leatherne Bottel, a riverside eatery and former village pub off Wallingford Road, after working there for several months as a freelance marketing and IT consultant.

It has reverted to its original name after four years’ trading as Rossini at the Leatherne Bottel, when it was run as an Italian restaurant by Maurizio Vajana. Before that it was managed by John and Julia Abbey and recommended by Michelin but lost its endorsement after they left.

Mr Vajana stepped down in May citing “unforeseen circumstances” so Mrs Albin, a married mother-of-three who has helped to run Goring’s biennial food festival and its joint regatta with Streatley as a member of the villages’ boat club, offered to take over.

She was appointed by Reading FC chairman Sir John Madejski, who owns the premises, about a month ago and spent several weeks carrying out a deep-clean and repainting the interior. The business, which began trading on July 13, will shut next January and February for a more extensive makeover.

The kitchen is run by Adam Hague, 37, who lives on site and worked for many years as a sous-chef at Hotel du Vin in New Street, Henley, and before that in London for Michelin-starred chefs Tom Aiken and Garry Hollihead.

The menu is made using mostly British ingredients with some more unusual fare like crab with kohlrabi and yuzu, a Japanese citrus fruit. It also sells locally-brewed drinks including Bumble Bee cider, made by Goring residents Tim Schulz and James Dawe.

Mrs Albin, who used to be marketing director at the Michelin-starred L’Ortolan in Reading, said: “We’re not actively seeking to get relisted in the guide as our focus will simply be on great food and creating a relaxed environment. Everyone who works here gets bitten by the bug and falls in love with the place so when the opening came up I was very excited and went for it. I had been working with the owners last year so they knew me well.

“It gets right under your skin because you’re right beside the river and it’s such a lovely community to be a part of. People are very forward-thinking in Goring and very keen to support us — a lot of people have come back and expressed real relief that the place is open again.

“There’s so much going on in the village, from the Gap Festival to the Goring Gap in Bloom bid and we want to be involved with as many things as possible. It won’t happen immediately but we want to build it over time.

“It also has a great community of independent businesses all offering something new — even the restaurants, which is good.”

She added: “We only had a few weeks to get in here and were initially relying on word of mouth but now we’re ready to put ourselves out there and are very excited about the future.”