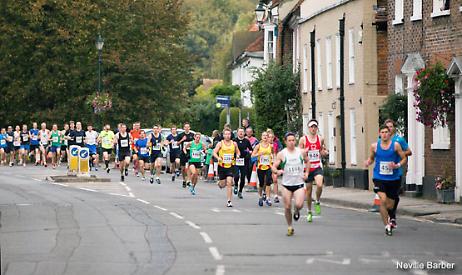 RUNNERS are gearing up for the 35th Henley half marathon next Sunday.

Hundreds of people have already signed up for the annual event and the accompanying Henley Standard 10km, which are both organised by the Rotary Club of Henley Bridge.

The One Mile Challenge, which covers a short course near Swiss Farm, will return for year.

This includes three teachers, two governors, 21 parents and 26 children. Everyone is getting sponsorship and they hope to equal the £3,000 total they raised at last year’s event.

This year they are fund-raising to help finance the installation of an artificial grass surface in the key stage 2 playground. To donate, visit http://uk.virginmoneygiving.com/team/TeamShiplake2017

Among the half-marathon runners will be Andrew Knight, who is raising money for Riverside Counselling Service, which provides affordable, professional counselling in Henley and the surrounding area. He has already raised £500.

Mr Knight, 46, took up running two-years ago for general fitness, mostly running shorter distances. He was inspired to sign up for an event after watching the BBC’s Mind Over Marathon.

It aired in April and told the story of 10 people with different mental health issues and how they ended up running the London Marathon.

This will be his first half-marathon and he hopes to continue building up his training to run a marathon next year to raise money for mental health charity Mind.

In preparation for the event Mr Knight, who lives in Wallingford, has built up to training run of 14 miles. He said: “Running is my own therapy, that and chocolate.

“Although I have not enjoyed 95 percent of my runs, and I have found most of them challenging, the benefits of doing them outweigh the negatives. I’m really excited for the half marathon. I thought it would be a struggle but I’ve done 13 or 14 miles and survived. I’ve been running three or four times a week and have managed about 1,500 miles in the last year and a half.”

The races will start and finish at Borlase Field, next to Henley Rugby Club.

The main race follows a route over Henley Bridge, along Remenham Lane to the Flower Pot pub at Aston, back along the towpath and over the bridge.

During the race sections of Marlow Road and Bell Street, New Street and River Side and the road leaving the town over the Henley Bridge will be closed to traffic.

Peter Wilkinson, who has been involved in organising the race for 12 years, said 650 people had signed up for the half marathon and 350 for the Henley Standard 10km race. He said: “The numbers have kept up with the level of entries from last year and there are unlimited spaces on the day.

“It’s a beautiful town and the route includes the famous heartbreak hill, up Icehouse Lane to Fawley. People come down to the town for the day from across the country. Others make a weekend of it and use it as a reason to visit Henley.”

The money raised by the event, which is usually more than £20,000, goes to the Royal National Lifeboat Institution and other charities.

Previous beneficiaries include the Sue Ryder hospice at Nettlebed and the Chiltern Centre for disabled children in Henley.

The cost of entry is £35 for the main race and £30 for the 10km. All the runners are chip-timed and all finishers receive a medal and a goodie bag.

Online entries are now closed but places will be available on the day. Competitors can register from with the races starting at about 9.30am.

Entry to the one-mile challenge costs £6 per child. All ages are welcome.