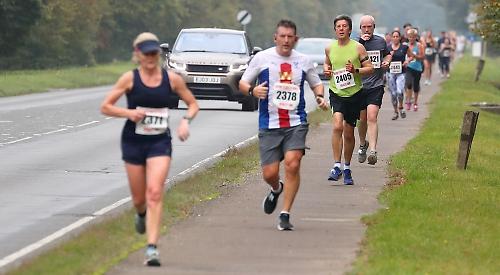 A TOTAL of 262 people took part in this year’s Henley half marathon.

The 36th annual event returned on Sunday after being cancelled last year due to the coronavirus pandemic.

The overall number of participants was down on the 600 who took part in the event in 2019.

The races began and finished in Borlase Field, next to Henley Rugby Club, off Marlow Road, with the two sets of runners being set off a few minutes apart.

The main race followed a route over Henley Bridge, along Remenham Lane to the Flower Pot pub at Aston, back along the towpath and over the bridge. The runners then went along Marlow Road, up Icehouse Lane to Fawley, down Fawley Hill and then back to the start via Fair Mile.

The 10km course followed the second section of the course from Marlow Road.

The half marathon was won by Paul Piper in a time of one hour, 11 minutes and 32 seconds, almost six minutes faster than the 2019 race winner.

Mr Piper, 39, who lives in London and works at Heathrow Airport, said: “It was a last-minute decision to join the half marathon but I’m very pleased with the result. I really enjoyed the course and the race, apart from the hill, which was quite challenging.” The runner-up was Richard Price, who finished in one hour, 13 minutes and 50 seconds with Mark Worringham in third place with a time of one hour, 14 minutes and 18 seconds.

The first women home were friends Jen Armson and Emma Langston Davis, who crossed the finish line running hand in hand in a time of one hour, 27 minutes and 40 seconds.

Ms Langston Davis, 35, a physiotherapist from Shiplake, said: “It was fun to take part and really nice to be running together. We had agreed to run at a pace which was manageable and that’s what we did. Jen had to really encourage me when we were running up the hill but once you got to the top, the view was amazing.”

Ms Armson, 41, a solicitor from London, who ran the half marathon in 2006, said: “I really enjoyed doing it with Emma all the way and crossing the finish line together felt fantastic.

“This is a lovely local race and I remembered the course and especially the hill, which I know lots of people find difficult — it’s a good challenge.”

Other participants included Jonathan Smith Willis, who grew up in Henley and ran the whole way while pushing his daughters, Georgie, one, and Harriet, three, in a buggy. He finished in one hour, 50 minutes and 17 seconds.

Mr Smith Willis, 36, said: “I wanted to give my daughters a taste of this race as I love Henley and I’m part of the rowing club here. I wanted to inspire them and it was also a good workout for me.

“The hill was very hard work but everyone we encountered during the course was so supportive and positive, smiling and waving at us and chatting to the girls.”

BBC television journalist Sophie van Brugen, from Shiplake, ran in aid of Sue Ryder. whose nurses cared for her mother Susan before she passed away in September last year. She had a photograph of her attached to her vest.

Ms Van Brugen, 41, took one hour, 58 minutes and 44 seconds to cross the finish line where her husband Phil Taylor and children Rufus, 10, and Miles, six, were waiting for her.

“I shed a tear as I crossed the line,” she said. “I’m really chuffed with my time. I’m told that under two hours is a decent time so I’m very happy. The hill was tough but I didn’t stop. I’m not sure I went really fast but I did it, which is what counts and running for a local charity was great.” Ms Van Brugen, who raised more than £2,200, added: “There was a great atmosphere and everyone was really friendly — it’s such a lovely local race.”

He said: “I really enjoyed it and it was a fantastic event. Everyone was really encouraging, friendly and welcoming and I thought the race was very well organised.

“It’s only my second year here in Henley so it’s nice to explore a bit more of it while running and I’d never run that way before.

“It was lovely to have members of the Rupert House community joining the race and also turning up to support us.”

Jenny Ovstedal, marketing manager at the independent school, took part with her daughter Elin Barr, 11, who was running in aid of the Chiltern Centre in Henley for disabled young adults and raised more than £300.

Ms Ovstedal, 41, who finished in just under an hour and less than a minute slower than her daughter, said: “I wanted to run with Elin and we decided to do the 10km. She wanted a bit of a challenge and found it quite fun.”

“She is aware there are people who can’t run and wanted to raise money for them and that’s why she chose the Chiltern Centre.”

David Dibben, from Caversham Heights, finished in one hour, 43 minutes and 20 seconds.

“That’s fairly pleasing as I will be 73 next week,” he said. “In common with everyone else, I was just delighted to get up the climb to Fawley and live to tell the tale. It’s an absolute killer. And, like everyone else, I was pleased to see the event on again. We were grateful for all the support through the town.”

The runner-up was Matt Puddy, who finished in 42 minutes and 49 seconds, followed by 15-year-old Tom Lebeau, from Bix, who crossed the line in 43 minutes and 52 seconds.

Mr Lucas, who works in healthcare, said he ran the half marathon in 2018 and added: “It feels really good to be back and I am very pleased with my time.

“I started running competitively in 2015. With this course, it’s about learning how to pace it as the section up the hill is quite tough but after that you can breathe a bit more. I’m now looking forward to running the Woodcote 10km as that was also cancelled last year.”

Tom, a student at Shiplake College, said: “I’m really pleased with this result. I really enjoyed the course. I did it in 2018 but obviously I was a lot younger then.”

His father Daniel, who supported him, said: “I’m very proud of Tom. He did a lot of training for this race and it’s great to see this result.”

The first woman home was 17-year-old Amelie Judge, from Shepherd’s Green, who finished in 50 minutes and 55 seconds despite only deciding to enter at the last moment. Her father Bill also took part and finished in 58 minutes and 39 seconds. Amelie said: “I didn’t even know I was going to run it until two days ago. I play lacrosse, hockey, netball and a bit of gymnastics at school, so I felt quite ready. I really enjoyed it. Running is something I do with my dad quite a lot but I also enjoy doing it on my own.”

Other participants included Paul Robinson, 60, from Sonning, who started running during the first lockdown last year and finished in one hour, 11 minutes and 35 seconds.

He said: “I think this shows it’s never too late to try something new. I want to encourage people my age to do something they have never done before. I found some parts of today’s race quite challenging but I’m pleased with the result.”

Fiona Hortopp and her daughter Gabrielle, 16, from Lower Shiplake, were running together. Mrs Hortopp said: “I’ve run the half marathon a few times before but it was Gabrielle’s first 10km and she really enjoyed it.

“She started running this year and this was her chance to try to do a longer distance.

“It was nice to be back out after two years without running, even though the event felt a lot less busy than it normally is.”

She finished in one hour and 45 seconds, while Ben took 50 minutes and 20 seconds.

Ms James said: “We try to run it every year as it always comes around my birthday, so it’s a tradition for us. I was pretty pleased with my time and proud of Ben who was one of the fastest. We used to run together when he was younger but now I just can’t keep up with him.”

Every finisher was presented with a medal.

Mark Harling, president of the Henley Rotary Club, which organises the annual event with the Rotary Club of Henley Bridge, said: “There is a huge amount of work involved so it is good to see the runners back on the course and enjoying the races, albeit in smaller numbers than in previous years.

“The weather was good and we couldn’t have asked for anything better. We look forward to holding the event again next year.”

The course was marshalled by volunteers from the Rotary clubs who handed out water in paper cups and Henley army cadets, who cheered the runners.