Having covid made me want to be fit again, says charity runner 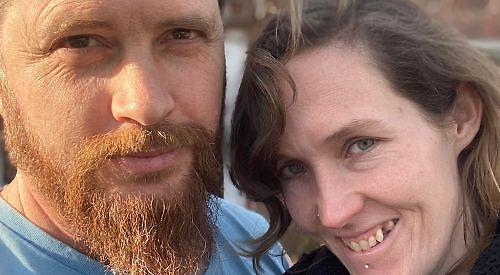 A MAN is to run a half marathon for charity after recovering from covid-19.

Merlin Meyer, 42, of Wood Lane, Sonning Common, says he felt so ill when he caught the virus in November that it made him determined to become more active and lead a more healthy lifestyle.

He lost his appetite and only consumed fruit and water for 10 days, so that he lost 6kg.

Mr Meyer, who lives with his partner Holly and their four children, said he and two of his daughters had caught covid.

“I had a total loss of appetite,” he said. “I just didn’t want to eat anything and had really bad flu, a headache, fatigue and very sore eyes.

“I survived on fruit and water and as a consequence I lost weight.

“I realised this was a great head start because I was quite heavy before and it wasn’t comfortable to run. I felt so disgusting during covid that I decided to start running
afterwards.

“I began by just leaving the house and running for five minutes in any direction and then five minutes back and I did that every day.

“Then I increased it to 10 minutes. By January I was doing 3km or 4km every other day.”

Mr Meyer, who works as an engagement manager for an environmental charity, now runs up to 20km per week as well as taking part in high intensity training twice a week.

He also coaches grassroots football at Rotherfield United Football Club in Gallowstree Common. He said: “I can only run in the mornings. I have four children so there’s no time in the day and by the night I’m knackered, so I’ve been running at 5am.

“The first time I went out I was thinking, ‘Oh my god, it’s really dark’.

“I’ve bought myself a new pair of running shoes, which has made such a difference, and a new vest with pockets to hold my water and phone. It has been absolutely revolutionary as I can listen to podcasts and by the end I think, ‘Wow, that was 5km’.”

Mr Meyer will be taking part in the Reading half marathon on Sunday, April 3 to raise money for Home-Start Reading, a charity which supports families who are struggling due to challenges with mental ill health, disability, bereavement, broken relationships, domestic abuse, poor housing and poverty.

He was asked to help by Sue Biggs, who is the charity’s co-chair of trustees and he knows through friends and family.

Mr Meyer said: “That was the first time I had heard of the charity but as I work in the charity sector I know they run on an absolute shoestring.

“I realised this was the real deal and it really gave me a target to work towards.

“I don’t really like running so I needed to convince myself and having a charity to run for helps. If you really push yourself and ask people to support you it gives you an extra level of motivation.

“I know how much the funds will benefit the charity. It’s also a great lesson for my kids to learn about discipline.

“They will be eating their breakfast when I come through the door from a run.”

He hopes to raise £300. To make a donation, visit https://localgiving.
org/fundraising/merlin-running