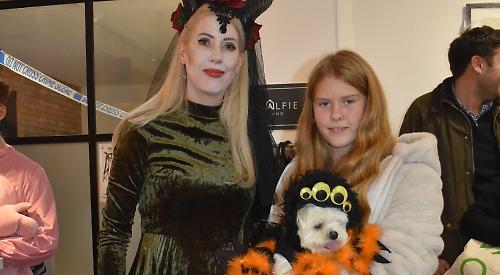 A MALTESE dressed up as a spooky spider won a Halloween fancy dress competition for dogs in Henley.

Haribo, who is four, was wearing fluffy orange spider legs and had four large yellow “googly” eyes and the judges said he looked “absolutely fantastic”.

His owner Lucy Milner, 10, from Shiplake, won a framed certificate, dog biscuits and a treatment at the parlour worth £65.  She said she chose the costume because her pet was not much bigger than a spider.

“It was different and the eyes looked really cool,” added Lucy.

The runner-up was five-year-old Vince, a half springer spaniel and quarter Yorkshire terrier and bichon frise, who was dressed as a green, sparkly dragon.

Owner Rose Copus, of Park Road, Henley, said she put the costume together at the last minute, adding:  “My dog’s humiliation has been worth it. This is the first time we’ve entered.”

Miss Copus won a basket of food, treats, a tennis ball and a tiara.

“My niece was supposed to come with us dressed as Lilo but she has had to self-isolate,” he said.

“She’s okay though and we’re going to video Skipper in the parade for her.” Each entrant was given the chance to parade with their dog on a red carpet and could have their pet photographed professionally.

They all received a goody bag full of treats and treatment
discounts.

James McEwen, a senior staff member and one of the judges,  said it was exciting to be able to hold the event again after it was cancelled last year due to the coronavirus pandemic.

He said it was a difficult decision to choose a winner from all the dogs. “The overall consensus was that Haribo’s costume was absolutely fantastic and some real effort had gone into it,” said Mr McEwen. “He just looked cute.

“Vince was also amazing and in fact all the dogs that competed were fantastic.

“It is really lovely that after covid we’ve been able to move premises, offer more services and hold this event again. It has been a massive success.”

Fellow judge and Naughty Mutt Nice owner Karole Robertson said the parade was usually held outside but this year that was impossible because it was raining and there wasn’t much room on the pavement.

However, there was more space in the shop than at her old premises.

She said: “We’ve never had rain on the night before but luckily everyone could come inside.”

Other dog costumes included a chicken, pumpkins, a cowboy, a ghostbuster, a black cat and a scare queen.

“They always do but this year the costumes really complemented the breeds and the dogs’ character.”