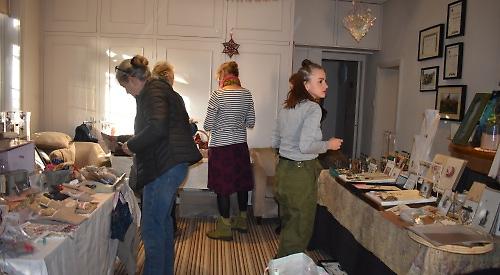 A Christmas charity bazaar was held in Hambleden for the first time. The event was organised by residents Charlie Lumley and Sarah Harper (pictured, right) and took place in the village hall. Twenty-five stallholders were selling festive items such as tree ornaments and gifts and gave a percentage of their earnings to the Dash charity, which supports people experiencing domestic abuse in East Berkshire and South Buckinghamshire.

The village store was selling hot dogs, mulled wine and roasted chestnuts. Father Christmas also made an appearance. Mrs Harper, who runs the store, said: “We’ve had a struggle in the last two years due to the pandemic and not only is the store the heart of the village but the women in the shop really support each other. Dash is a charity that has been used by members of the team so it’s all about girl power. It’s our first year doing it across the village and if it’s a success we’ll bring it back.”

Mrs Lumley added: “We’re supporting local people as well. The quality of the stands was amazing. It’s a village fair and Hambleden is wonderful with a good community.”