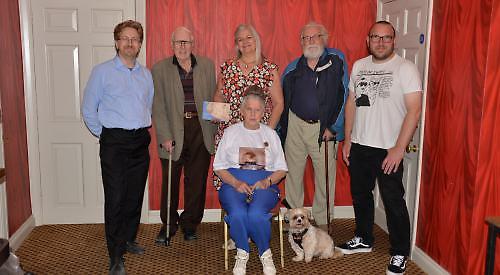 THE new manager of the Kenton Theatre in Henley says he’s confident of achieving another record-breaking year of ticket sales, writes Luke Adams.

Max Lewendel joined the New Street venue in July after it recorded its best ever year with 25,000 ticket sales. He put this success down to the hard work of his predecessor, Paula Price-Davies, and the support of the community for the historic theatre.

Mr Lewendel said: “The trend is continuing — this coming autumn season has higher sales than our last autumn season, so I am quietly optimistic that we are on track to have another record year this year.

“A lot of the sales and planning had been done before I arrived. I would like to say my spectacular management within three weeks brought in a record £40,000 worth of sales but I don’t think that would be the case!”

He said a combination of local talent and professional productions would help the theatre during his first full season in charge.

Mr Lewendel, who grew up in Illinois, said: “The theatre is doing more and more every year. Many years ago it was just doing a couple of productions by local amateur groups.

“The overall trend is positive and the support of the town has been key to that. Every time we try something new people come and see it and they tell us what they want. There is so much local talent and that always helps. About half of our programme is the locals and we have been adding more professional companies to help support the productions.”

Key to the Kenton’s success is the annual pantomime, which this year is Sleeping Beauty, written and directed by Heather Simpkin.

She said: “Pantomime is often the first experience children get of the theatre, so I take it extremely seriously to ensure that they have a good time and see the magic. It is a huge responsibility but I relish that.

“The support from Henley residents is more than I have ever experienced anywhere else. People are keen to see us promote home-grown talent and build from within because they love this place.”

She added: “Max’s energy has brought a new lease of life to the place and he is really exciting and vibrant.”

Mr Lewendel said he had big plans to transform the Kenton, which is the country’s fourth oldest working theatre, and “bring it into the 21st century”.

It needs a new stage and the changing rooms and toilets need modernising, among other improvements.

Mr Lewndel: “The theatre is very old, which means it has a lot of character. However, it also means there are areas we need to look at.

“The stage is uneven and is not sprung properly. It makes it much harder to dance on and can be really bad for the performers.

“Our dressing rooms have not been touched in decades, so they are also on our list of jobs. There are four of them and they will all need to be renovated.

“The toilets desperately need looking at. Forty years ago they were probably fine but they need sprucing up.”

The theatre will apply to the Heritage Lottery Funding for grants.