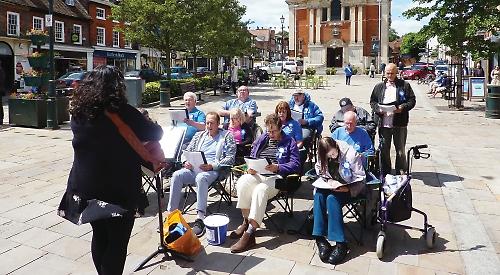 Led by Eleanor Braganza, the charity’s music therapist, they sang a range songs from classics such as We Will Rock You and Imagine to more modern numbers by George Ezra and Passenger.

James Higgins, from the charity, which is based at Brunner Hall in Greys Road, said: “Lots of passers-by stopped to chat about the charity, make donations and take leaflets, which we were really pleased about. Some even stopped to join in the singing. The choir really enjoyed singing in the town centre — it was the first time they have performed outside.”