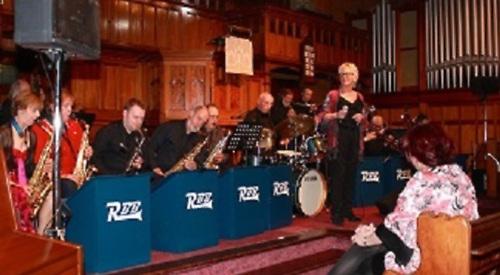 EIGHTY-FIVE people attended a fund-raising concert at the Christ Church Centre in Henley on Saturday, September 30 to celebrate 30 years of Headway.

The ever popular Roy Bailey Big Band played old favourites from Count Basie, Duke Ellington and Glenn Miller and there were some great vocal performances from singers Gail Hendrickx and Ed Hall, who also comperes the band. Gail sang numbers from the songbook of Ella Fitzgerald and Ed covered songs from Frank Sinatra, Michael Bublé and Matt Munro.

The evening finished with a raffle of donations from companies and organisations in the town. The total raised was more than £2,000.

Headway would like to thank all those who helped on the evening and everyone who attended.

The charity provides aftercare for people who have been unfortunate enough to suffer brain damage through an accident. Of course, this can happen to any one of us at any time. The NHS will put you back together but once you are home there is very little if no support. Headway will fill that gap with the support you need.

It has about 200 clients that use the service either directly or at a distance. As a charity, Headway needs support. It does get some money from the Government but needs local help.

The Roy Bailey Band, which is based in Goring, has supported Headway for many years and brings a small group to the charity’s base at Brunner Hall in Greys Road to play at its Christmas party each year.