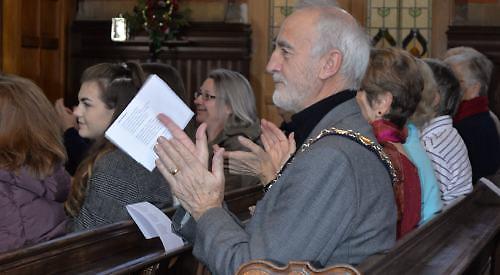 The brain injury charity, which is based in Greys Road, welcomed Councillor Ken Arlett to the annual service at Christ Church, which featured performances by the Henley Bell Ringers and harpist Eleanor Dunsdon.

A choir containing service users and the charity’s volunteers got the concert started by singing some of their favourite songs, accompanied by music therapist Eleanor Braganza on the piano. She said: “I live in London but I commute to Henley because I love this charity so much. I really enjoy working with clients who have brain injuries and giving them one-to-one sessions. It gives them space to process their emotions.

“Headway provides an environment for clients who have been through very difficult and life-changing times and it is a community rather than a charity.

“They are the most positive bunch of people I have ever met and show so much commitment to the choir.”

The choir performed Love Is All Around by Wet Wet Wet, Greatest Day by Take That and Daydream Believer by the Monkees.

They were followed by the Henley Bell Ringers, who delivered Christmas favourites including Mary’s Boy Child, Jingle Bells and Away In A Manger.

The finale was a singalong to Silent Night as Ms Dunsdon played along.

The harpist was presented with flowers by Zoe Lane, fundraising manager for the charity.

The winners of the raffle were drawn at the end of the concert before the guests moved into the Christ Church Centre for mince pies and refreshments.