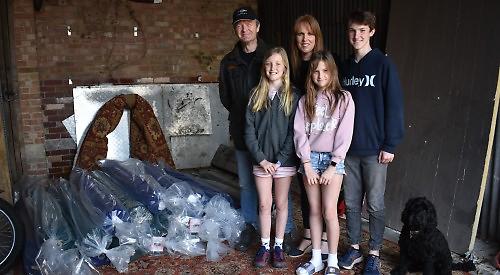 A HENLEY tailors which makes bespoke rowing blazers is to manufacture 840 sets of surgical scrubs for doctors and nurses treating coronavirus patients.

Collier & Robinson, which has stopped its regular production since the outbreak because it is a “non-essential” business, will be delivering the protective tops and trousers to the Royal Berkshire Hospital in Reading within the next few weeks.

Kristie Shemilt, who founded the business with her husband Mark in 2002, launched a crowdfunding appeal which reached its £8,500 target for the cost of the materials in three days, so she has increased the figure to £10,200.

She and about a dozen volunteers, many of whom live in or near Henley, will be sewing them together at home free of charge.

The project has grown so much she is now seeking more machinists who can cut the fabric before it is sent for sewing.

Mrs Shemilt had the idea a few weeks ago, when she was approached by several friends whose loved ones work in medicine and weren’t being issued with enough protective clothing.

She considered taking individual orders but decided she could help more people by producing a big consignment.

She asked around her suppliers and one mill in Yorkshire was able to offer 2,600m of a suitable material at a discount. This is a polyester and cotton blend which can be washed at high temperatures and also has a sterile coating.

Mrs Shemilt then emailed local hospitals and medical trusts to ask if they needed help and heard back from the Royal Berks on Saturday.

She immediately launched her online appeal, which she named HOT Scrubs, and it raised thousands of pounds in its first 48 hours.

She spent the rest of the weekend drawing up the outlines for the garments at home while her husband and children Toby, 13, and twins Ottillie and Amelie, 11, built a dispenser for the material.

The cloth arrived at Collier & Robinson’s workshop at Henley Enterprise Park, off Greys Road, on Tuesday.

Mrs Shemilt and three colleagues, who remained 2m apart at all times, unloaded it and cut out the patterns in bulk using machine tools.

These were dropped at the homes of volunteers, whom Mrs Shemilt recruited through her social media contacts and friendship groups.

It’s hoped that the first of several batches will be presented to the hospital this week. They will be washed before delivery and volunteers will be asked to handle them as little as possible to reduce the risk of transmission.

Once they have finished the order, Mrs Shemilt hopes to continue raising money to sew protective clothing for the Henley district nursing service.

She may also support the Wycombe Hospital in High Wycombe as her girls attend nearby Godstowe School and many of her donors live in that area.

She said: “The Royal Berks confirmed they were desperate for scrubs and when I told them how many I could make, they said it would go a long way towards meeting their needs. They were extremely grateful but we’re delighted to help.

“I was pleased to hear from them as it was a shame that our workshop was empty when we could have been using it to make a difference. I wanted to make the biggest possible impact rather than just helping a nurse here and a doctor there.

“I’d heard repeatedly how many medical professionals were low on clothing. They’re just wearing thin plastic sheets for protection and some have had to continue wearing their scrubs for new patients after getting blood on them.

“It was very important to find the right fabric as I could have imported something from China at half the price but it wouldn’t have lasted.

“As soon as I appealed for help I was overwhelmed with offers, not just from people who can sew but drivers willing to make deliveries. Many who’ve been in touch are friends of friends and I don’t even know who some of them are.

“People have been so generous and supportive. It has all gone a bit crazy but I’m moved and incredibly grateful.

“There’s so much more we can do when we’ve finished this project and my regular customers have been understanding because they know we can’t work on their orders until the outbreak has passed.

“This will be very much a team effort and something I could never accomplish it alone. It’s a big task but it’s nothing compared to the risk that NHS staff face every day while fighting this virus.

“It’s the least we could do because any one of us could need their help over the coming weeks.”

Mrs Shemilt’s usual clients include Henley Rowing Club, Upper Thames, Shiplake College and the Oratory School as well as Cambridge University Women’s Boat Club and others in America, Hong Kong and across Europe.

This week she was due to be in Tokyo showcasing her wares for the Olympic Games but these have been postponed until next year.

She said: “This is a very different project from what I’m used to and I certainly didn’t imagine being in this position at the start of the year. However, the coronavirus has changed many people’s plans and you just have to adapt.

“I had orders cancelled when it was announced that Henley Royal Regatta wasn’t going ahead but that’s entirely understandable and those clients are still interested in next year.”

To volunteer for the campaign, email hotscrubs20@gmail.com or visit www.justgiving.com/crowdfunding/kristie-shemilt to make a donation. Alternatively, visit the Facebook page “HOT Scrubs – RBH needs you”.