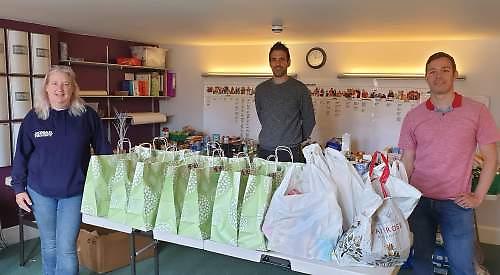 A HENLEY charity is to launch a £25,000 appeal next year to mark its 25th anniversary.

The money will be used to buy a new minibus for the Nomad youth and community project, which is based at the d:two centre in Upper Market Place, as well as fund its work.

A year-long series of fundraising events will begin in May to coincide with the third annual Henley Heroes awards, which raise money for the charity.

A dinner and auction will be held in the autumn with Lord Hall, former director-general of the BBC, and his wife Cynthia, a deputy lieutenant of Oxfordshire, as the speakers.

Nomad will also launch sponsorship and support programmes, enabling people to give on a monthly basis. Other plans include a walk and an ergo rowing challenge in the summer.

The details were revealed by Chris Ward, who sits on the charity’s advisory board, at its annual meeting last week.

The meeting heard that in the financial year to March 31 the charity recorded a surplus of almost £30,000, compared with a deficit of £19,000 the previous year.

Funds brought forward from the previous year amounted to £32,241, meaning £61,972 was carried forward to this year.

Trustee Duncan Carter, vicar of Holy Trinity Church, said: “It represents a broadening of the base of support within our local community. There’s still a challenge ahead and plenty more we’d love to do if we had the resources to do so.

“We are coming to the end of a four-year cycle of giving from South Oxfordshire District Council. They are one of the main contributors so we can’t be complacent.”

He said the council had extended its support for 12 months because of the coronavirus crisis but its grant was gradually diminishing.

Rev Carter added that Sue Prior, the charity’s funding co-ordinator and family support worker, was not planning to stay indefinitely and that it would be a challenge to find a replacement.

Tim Prior, Nomad’s youth and family team manager, paid tribute to his team for their adaptability and flexibility during a challenging year.

The charity had to change its focus as many of its support, training and mentoring services had to be stopped because of the pandemic.

The Nomad food bank saw a huge increase in demand. From March to October it delivered 955 food parcels, compared with 197 during the same period last year, an increase of 385 per cent. The number of adults supported rose from 238 to 1,427 this year, a 500 per cent increase while the number of children supported increased from 96 to 641, or 568 per cent.

The charity was still able to offer online mentoring as well as family and parenting support and had regular online communication with young people and families throughout the first lockdown.

It also offered challenges to young people, including making flapjacks at home and sending pictures of their creations to the charity as well as making spaghetti and marshmallow “towers”.

One evening a week during lockdown the charity became the Nomad pizza delivery service thanks to the generosity of Justin Whelan, of Pirate Pizza, who makes and cooks the pizzas on board his barge Muchroom Bargee.

Nomad also provided homeless people who were housed at the Red Lion Hotel with food vouchers at the request of the district council. Mr Prior said more people had been fundraising for Nomad with £4,000 raised from the sale of face masks and more than £1,000 by a swimathon.

He called it “incredible” to see people’s kindness.

DJ Gary Boys, of River Terrace, has been raising money for the food bank at his DJ One Deck request show, with £360 made so far.

Catharine Darnton, headteacher of Gillotts School, who is on Nomad’s advisory board, described the charity as “priceless”.

Mrs Ponsonby said: “The town is incredibly lucky to have Nomad. There should be one in every town in Oxfordshire.”