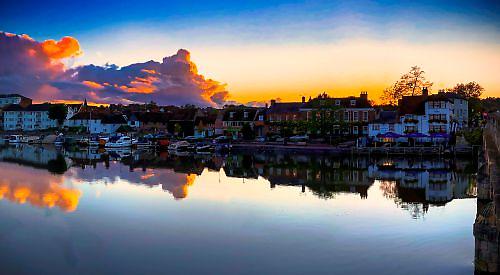 RESIDENTS of Henley and South Oxfordshire should be optimistic about 2021 despite the continuing threat of covid-19, says John Howell.

In his New Year message published in this week’s Henley Standard, the Henley MP says “there is every reason to be hopeful”.

His comments are echoed by council leaders in their messages.

This is despite Oxfordshire, Berkshire and Buckinghamshire joining the rest of the South-East in tier 4, which means all non-essential businesses have had to close and people must follow strict regulations on their movement.

The latest figures show that both the rate of coronavirus infections and the number of deaths are increasing.

Mr Howell says he is looking forward to 2021 with “great optimism”.

He says: “As we enter the new year, there is more than light at the end of the tunnel — there is a vaccine which is already being administered in large numbers.

“Both of those sound utter bliss and give us the chance to change things for good.” In his message, Henley Mayor Ken Arlett says: “As we move into 2021, the town council and I are optimistic for Henley in the coming year.”

Oxfordshire County Council leader Ian Hudspeth says: “This year the spring will hopefully be when that cloud is lifting and, as the daffodils and the blossoms begin to appear, we can begin to recapture some of the normal everyday things that we took for granted, such as visiting friends and relatives and going out for a relaxed meal or a drink with friends.

“So many of the regular and much-valued events that are a regular staple of our calendar did not happen in 2020 and we will hopefully see their return too.

“That very much includes Henley Royal Regatta with its proud history dating back to the 19th century. It was a sad loss to the Oxfordshire calendar in 2020.” Businesses were less optimistic, having had to close for a third time following a turbulent year of lockdowns.

“If they turned around and said, ‘you’re all going to be shut for the next three months and this is the support package’ at least we would understand where we stood and could plan accordingly. But this yo-yoing is no good for anybody.”

He said that trade had already been down by 65 to 70 per cent on a normal year.

“The rates and the VAT bills start again at the end of March and we simply can’t afford it,” he said.

“It’s a tight margin business so we need some reassurance from the Government that they are not going to tax us heavily again as soon as we reopen, which is what the current plan is.”

Laurence Morris, of Laurence Menswear in Duke Street, said it had been helpful to be able to remain open before Christmas, when South Oxfordshire was in tier 2.

However, retailers would be closed during the traditional January sales and probably beyond that.

He said: “The powers-that-be make the rules and we have to follow them. It is incredibly frustrating.

“I really felt for the businesses in Marlow and Reading and other places that had to shut two weeks ago so in Henley we were fortunate to be able to stay open in the run-up to Christmas.

“But now that we have had to shut it’s going to hurt a lot because we normally have our sale. January is always a good month for clearing autumn stock and getting things ready for the new stock.

“It just puts a dampener on everything and the worst thing is we don’t know how long this is going to go on for.

“A lot of the success we had in December was because we weren’t open in November but just when you think you have got something back it’s going to go again.”

Hilary Redhead, joint manager of the Bell Bookshop in Bell Street, said she wasn’t surprised about the move into tier 4. “We’re just going to make the best of it,” she said. “We’re going back to our click and collect service from Monday so we’ll be here in the shop.

“We’ll carry on trading virtually the best we can and try to stay positive. We’ve had a really good December so we’re in a good place.”

Christiaan Jonkers, of Jonkers Rare Books in Hart Street, said: “I think everybody knew that Oxfordshire was on borrowed time, particularly as there were high levels just across the borders. In Henley you’re literally a stone’s throw away from Berkshire and Buckinghamshire.

“From a business point of view, we’re fortunate to have had a good run-up to Christmas. A lot of people came in and brought presents and gifts from us.

“I don’t see us opening in January barring something extraordinary. I think it’s better to swallow a bit of pain now and actually get on top of the situation, particularly with the vaccine being rolled out.”

Lorraine Hillier, who runs the Hot Gossip coffee house in Reading Road, said she would switch to a takeaway service that she had offered in the previous lockdowns.

“It’s very frustrating but that’s the way it is,” she said. “It’s very worrying, the latest development, with the mutant strain so I can understand why the Government has taken this action. There’s little bit more hope now there’s a vaccine.”

Nick Willson, landlord of the Flowing Spring pub in Playhatch, said: “I would actually like it if now the Government just stuck to these tiers until there’s a really significant drop in infections because they sort of wobble around from one idea to the next.

“I’d rather see this country become healthy and safe and if it means we trade on a lower level and get through it and everyone’s okay, that’s more important.”

In the past week, laboratory tests have confirmed 417 new cases of coronavirus in South Oxfordshire with an infection rate of 293.5 cases per 100,000 residents.  This is an increase on last week's figure of 225 cases while 84 people have died from the disease since the start of the pandemic.

There were 36 new cases in Henley itself and another 399 in the surrounding area, including Shiplake and Binfield Heath (15), Sonning Common (24), Goring, Woodcote and Whitchurch (23), Benson and Crowmarsh (20), Watlington and Nettlebed (21), Caversham Park and Emmer Green (28), Caversham centre (36), and Caversham Heights (38).