Coffee shop barista brews up crochet tribute to the NHS 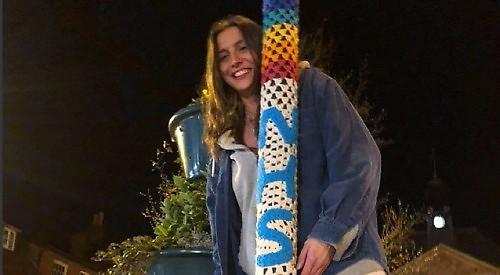 A WOMAN has been dubbed “The Yarnsky of Henley” for her crochet tribute to the NHS.

Jade Kirby, of Noble Road, attached the rainbow design to a lamppost in Falaise Square in the early hours of March 12.

She wanted to keep her identity a secret but she has been amazed by the positive feedback from residents.

Miss Kirby, 29, even managed to fool her cousin — Henley councillor and former Mayor Kellie Hinton — who didn’t realise for just over a week.

Adorning an object in this way is called “yarn bombing” and Miss Kirby hopes her creation will stay in place for as long as possible.

She said: “I knew I wanted to do it on a lamppost and I went early one morning to measure it. There is a plant pot behind it and that sort of disguises it, so not many people have noticed it.

“It took me about nine hours to make and I did the NHS letters separately and sewed them on. It is 100 per cent cotton and basically a giant granny square rectangle. I did the lines for the rainbows, with that being the theme at the moment. I’m really surprised it is still there, but we do live in a nice town. I was nervous even putting it up and I wondered if it would be there when I next went into town. I’ve just laced the back up and tied it at the top.

“I love crafting and I’ve always been very arty. I’ve been crocheting for the last seven years and I find it very therapeutic — you don’t think about anything else while you’re doing it because you’re concentrating and then at the end you get this feeling of having accomplished something.”

The crochet is four-and-a-half-feet tall and 11 inches wide to wrap around the pole.

Miss Kirby went with her friends, Rhiannon Nolan and Phoebe Lacy, to Falaise Square at 2am and they were only seen by one elderly couple in 20 minutes.

She said: “Nobody has said anything negative about it and lots of people have said it brightens up the town and puts a smile on their face.

“I didn’t want people to know I’d done it in the beginning because I wanted it to be like Banksy and then someone called me Yarnsky, which made me laugh. Everyone knows how much I love crochet.”

Miss Kirby, who lives with her mother Tracy, has been a barista at Hot Gossip café in Reading Road for the last three years.

She went to Trinity Primary and Gillotts School, before doing a BTEC in art at The Henley College.

After seeing a crop top online, she decided to teach herself how to crochet by watching videos.

For the last year, she has been selling her creations online and posting on her Instagram account called @hooked_on_handmade.

She has made more than 400 sales through her Etsy page, specialising in head scarves, crop tops and bralettes.

Clapping for the NHS became a way for the public to show appreciation last year and Miss Kirby would take part in the weekly ritual alongside her neighbours.

She said: “We were out on the street clapping and there were people banging pots and pans. It made me realise that we’ve got it quite good in this country. It made me really appreciate what we have.

“I’ve always been into art ever since I was a kid, but I only picked up crocheting after school. It doesn’t bring in lots of money, but it would be nice for it to become a more full-time thing. I loved it straight away and was naturally good at it.

“I’ve also started making and selling my own crochet patterns and if anyone is interested I would love to teach them.”

Councillor Hinton, who chairs the recreation and amenities committee on the town council, said: “I thought it was brilliant. It was a lovely surprise to find out it was my extremely talented cousin.

“What I love about it is that is spreads joy and it is like Henley’s own version of Banksy. It does no harm — it’s not vandalism or anything — and it brings colour and life to the town centre, while thanking our amazing NHS.

“Any time I see something like that, I always think of Jade and it reminded me of her, but until she said I had no idea.”