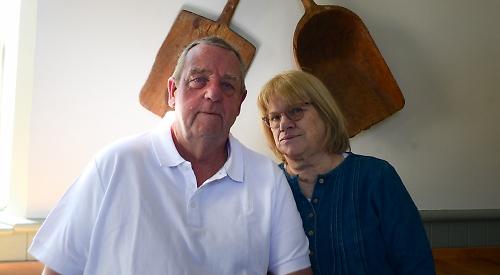 A CAFÉ in Nettlebed has closed after 10 years as the owners have retired.

Dave Field and Barb Grigor served food and drink at the Field Kitchen for the final time on Tuesday last week.

They say they have been overwhelmed by the positive comments from the community.

The couple, who live in Chalkhouse Green, had thought about retirement before the outbreak of the coronavirus pandemic last year.

Since returning to provide only outdoor service earlier this month, they realised that they had enjoyed having time away from work and wanted to devote more time to their families and hobbies.

Mr Field, 69, said: “Businesses opening up now have got a hell of a battle in front of them. Who knows what’s going to happen with covid?

“The week before we decided to close we did six days and roughly a 60-hour week. We talked about how tough that was and it was only when we got halfway to work on the Wednesday that we said, ‘No, that’s it’ and we both agreed.

“We will always be sad about it. I can’t tell you how many people we know — there were hundreds coming in here and some would regularly come from Oxford and London, which I take as a huge compliment. We had community support by the bucketload and that has never gone away.

“That’s the thing we will always miss — the people that came in. That will be the tough bit. It was a little hive of activity and the time would whistle by.”

Before opening the Field Kitchen in the high street, the couple managed the Four Horseshoes pub in Checkendon for three years and it closed down after they left.

Miss Grigor, who is originally from New Zealand, would spend a lot of time in the kitchen, particularly on days when the two chefs were not working.

She took great pride in the visual display of food at the front counter as well as the salads and coffee.

She said: “It is very sad. This was our life for 10 years and we loved every minute of it. I always wanted to be here and I was always looking for new ideas and recipes.

“At some point we’ve got to retire because we haven’t got the energy and stamina we had 10 years ago.

“We always said we had to close some time and I would rather it hadn’t been covid that decided it for us, but that is the way it has turned out. It just felt like the right time.

“Without the people, we wouldn’t have had a business. Just before covid was probably the peak of our business.”

Before the pandemic, the Field Kitchen was open six days a week but this was cut down to five days, from Tuesday to Saturday.

There was only space for 24 seats inside when covid restrictions came in and the same number outdoors.

Mr Field said: “If you get bad weather, you are trying to run a business on 24 seats and that just can’t work.

“Nobody has been able to second-guess covid. We all thought we would be over the worst with Eat Out to Help Out and then, bang, we were in lockdown again.”

One of his favourite memories is of when the Olympic torch came through the village before the London Games in 2012.

He stood outside the Field Kitchen and made more than 150 hot drinks in half an hour as the high street was packed with people.

Mr Field said: “That was excellent. Nettlebed was heaving and I’ve never seen anything like it.”

The Field Kitchen was part of what used to be Nettlebed Community School’s lunch room and the kitchen area was extended five years ago after the post office closed.

When the couple first opened the business, they were optimistic as there were no other cafés nearby.

Miss Grigor said: “It was only the pubs that were doing food and since we started a lot of other places have opened. It was quite exciting to be innovative at that time.”

Mr Field added: “We didn’t realise for quite some time exactly the impact it had on Nettlebed. After three or four years, we had people come to us and say we were the hub of the village.

“Estate agents would list properties and said they were ‘close to the Field Kitchen’. We started to realise what we had created and it has been phenomenal. We’ve had fantastic customers and loyal support all the way through.

“Our landlords, Robert and Diggory Laycock, have been incredible and have helped us in every way possible.”

Although there are no immediate plans for someone to take over, Mr Field believes the community would support a new business.

He said: “I’m sure someone will want to have a go and we wish them luck. I hope they have the same experiences we had here and that they get the same pleasure out of it. It has been amazing.”