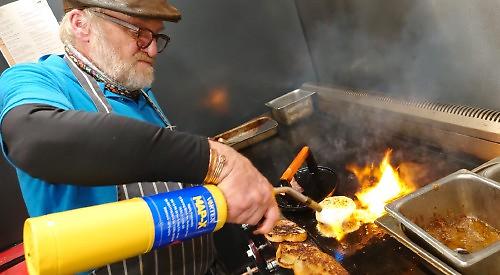 A CHEF and restaurateur has slammed diners who book tables and then don’t turn up.

He was speaking after 35 people with bookings at his pub on Sunday failed to show up.

In addition, he had to turn away 40 to 50 people because he thought he was fully booked.

Mr Worrall Thompson, who has been running the free house in Gallowstree Road since 2005, said: “We had a few no-shows since we’ve been able to let people inside but it all culminated on Sunday.

“The weather wasn’t brilliant but we don’t book outside anyway. We book for the number of tables we have inside and if people want to sit outside they can.

“I think people booked up to three different restaurants and then on the day decided where to go and forgot to the cancel the others they booked.

“We try to help our regulars and my motto is about finding happiness so when people don’t show up it leaves half the restaurant empty and there isn’t the same buzz and it ruins the atmosphere for other
customers.

“It’s bad but we take it on the chin, we’re big boys, but it is a pain in the backside. It’s affecting everyone, not just my chefs but my waiters as they rely on tips and service charges — I could have done with two less staff members that day.”

The TV chef is now considering adding a booking deposit, albeit reluctantly.

He said: “At the end of the day we’re trying to get people to support local. The no-shows were all newbies, as we call them, so we don’t really want to add deposits unless we have to.

“Maybe a fiver or so but it’s not something I would want to do as we’d probably have to employ another member of staff to handle that. Losing five to 10 customers could be the loss of a profit for some places and we lost 35 so that’s huge.

“If you are booking at a theatre and you don’t turn up you wouldn’t get your money back. Even hairdressers are taking deposits now as they are having similar problems. There are so many different industries where this is a difficulty and people think it doesn’t matter if they don’t show up.”

Mr Worrall Thompson said the pub waits for up to 20 minutes before declaring a booking a no-show and the tables will often stay empty.

“We’re not on the high street, so we can’t so fill the space with walk-ins,” he said. “It’s harder when you’re out in the sticks. Though, to be fair, there is another Greyhound pub so they may have been very busy.”

Mr Worrall Thompson, who runs the pub with his wife Jay, recalled that when he had his Ménage a Trois in London in Eighties and diners didn’t turn up, he would call them at 2am and ask them it was all right to let his staff go home.

“It was taking the mickey and they got upset but in the morning they realised they were wrong and called back and apologised,” he said.

“We wouldn’t be upset if you called to cancel, we take it on the chin and say, ‘thanks for calling’. Nobody minds but people need to get on the phone and tell us. Give us enough notice, four to five hours, if you can.

“Think about us as a smaller business trying to survive. If someone is throwing up last minute, not because of my food may I add, we will understand but if it’s because you woke up hungover and you don’t think you could make it just call as soon as you can and just don’t assume we’ll be fine.”