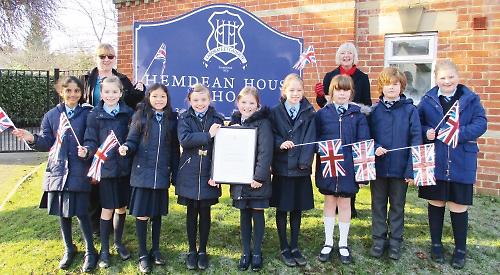 CHILDREN at a Caversham school are delighted to have received a surprise letter from Buckingham Palace.

Hemdean House School organised a street party in the grounds of the school in Hemdean Road last summer to celebrate the Queen’s 90th birthday.

Year 5 pupils sent handwritten letters to Her Majesty inviting her to join them at the event and last week they received a reply.

The letter, from the Queen’s lady-in-waiting, thanked the children and said that although she couldn’t attend their party she was touched by their kind thoughts and hoped they had an enjoyable time. It has now been framed and put on display at the independent school.

Alison Hicks, whose class wrote the letters, said “It is tremendous to receive such a wonderful reply from Buckingham Palace and lovely that the pupils’ letters have been acknowledged. They should all feel very proud.”